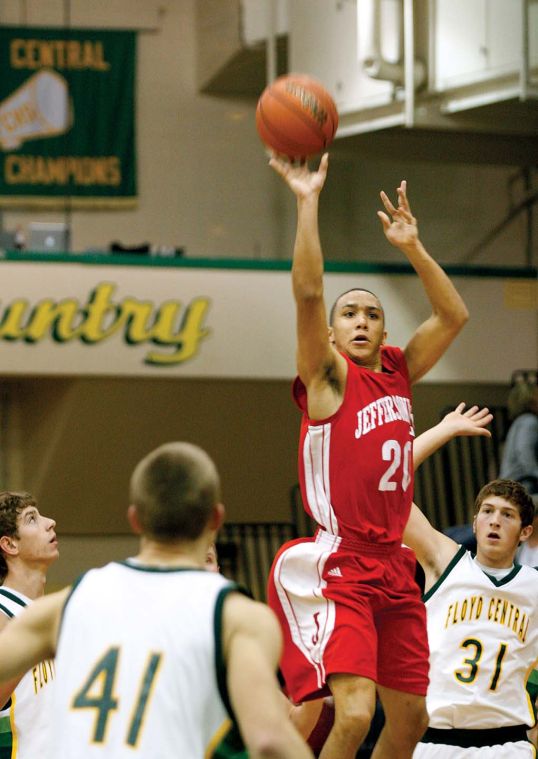 Jeffersonville's Eric Valentine throws up a last second shot at the end of the third quarter Friday night against Floyd Central. Staff photo by Kevin McGloshen 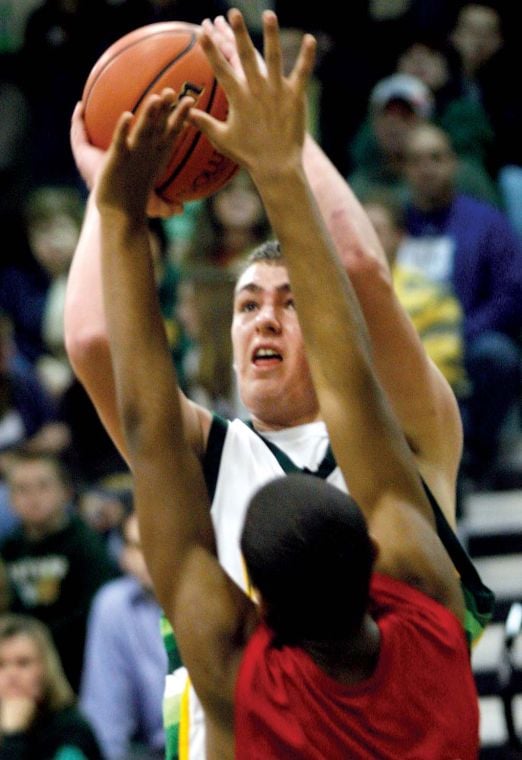 Jeffersonville's Eric Valentine throws up a last second shot at the end of the third quarter Friday night against Floyd Central. Staff photo by Kevin McGloshen

FLOYDS KNOBS — Road wins don’t come easy in the Hoosier Hills Conference. That’s a lesson first-year Jeffersonville boys’ basketball coach Tim LaGrange learns every time the Red Devils travel away from Johnson Arena. “Did we play perfect? No,” LaGrange said following Jeffersonville’s 71-56 victory over host Floyd Central on Friday night. “We let them back in a couple of times. We have a hard time finishing games. Heck, we have a hard time finishing a practice. But I’m pleased.” As for the Highlanders (2-7, 0-3 Hoosier Hills Conference), coach Randy Gianfagna was searching for a few answers after the contest. Primarily among them, just how the Red Devils were able to get to the free-throw line 37 times while his squad only attempted 14 from the charity stripe. The Red Devils (6-4, 2-2) were 26-of-37 from the line, while the Highlanders were 11-of-14. “I told the kids we couldn’t do three things. We couldn’t turn the ball over, we had to be aggressive on the offensive glass, and we couldn’t let them get to the free-throw line,” Gianfagna said. “The free throws, in particular, killed us.” Guard Eric Valentine led the Red Devils with 17 points and converted 8-of-14 free-throw attempts. Forward Edward Baker added 16 points, 14 of which came in the second half. Two 3-point Baker buckets early in the third quarter thwarted Floyd Central’s comeback bid. After being down 29-21 at halftime, the Highlanders scored the first five points of the third period off a lay-in and a free throw from center Buddy McAfee and a putback from guard Brandon Codey on subsequent possessions. Following the Codey bucket, Baker answered with a deep 3 from the left wing to stretch the lead back to six points, 32-26. McAfee came back on Floyd Central’s end by making a short jumper, but Baker next nailed another 3 to make the score 35-28 with 6:10 left in the third quarter. Baker’s treys were part of a 16-3 Jeffersonville run that gave the Red Devils a 48-31 lead with 2:44 left in the third quarter. That run effectively ended the contest, although Floyd Central was able to cut the lead to eight, 58-50, after a Ryan Adam 3 with 3:47 left in the game. "We made some turnovers in the third quarter, but those two baskets were big momentum stoppers for us,” Gianfagna said. “We played hard, but I’d like to be able to say that after a win.” Gianfagna said he was a bit mystified by the free-throw disparity and felt his inside players such as McAfee, who led the Highlanders with 18 points, could play with the Red Devil post players. “We don’t feel like most teams we play can guard us inside,” Gianfagna said. “I think sometimes we don’t remember that.” LaGrange said he was encouraging his players to bang inside with the Highlanders and knew good things would happen if they did. “We wanted to come in and attack the rim, and when we did that we had some success,” he said. “When we sputtered, we did things like take quick 3s and didn’t protect the basketball. But this was a good win.” Jeff freshman Evan Maschmeyer scored 14 points, while teammate Corey Carter chipped in 10. Both teams will play tonight. Jeff will host Providence, while Floyd will visit North Harrison. JEFFERSONVILLE 12 17 23 19—71 FLOYD CENTRAL 11 10 18 17—56 Jeffersonville (6-4, 2-2 HHC) — E. Valentine 17, E. Maschmeyer 14, Baker 16, Carter 10, Miller 9, Parrella 2, Clark 3, Adams 0, Coleman 0, A. Valentine 0, Kinnard 0. Floyd Central (2-7, 0-3) — McAfee 18, Biery 13, Codey 7, Hackemack 6, Huber 4, Briscoe 4, Schraffenberger 2, Thompson 2. Three-point field goals — Jeffersonville 5 (Baker 3, E. Valentine, E. Maschmeyer); Floyd Central 4 (Adam 2, Briscoe, Huber). Rebounds — Jeffersonville 24 (Baker 5); Floyd Central 24 (McAfee 6). Turnovers — Jeffersonville 16; Floyd Central 17. JUNIOR VARSITY: Jeff 48 (8-10-17-13) — Coleman 16, Eger 12, Marshall 9, Ewing 8, Fisher 2, D. Maschmeyer 1, Mayes 0, Billups 0, Bennett 0, Jackson 0; Floyd Central 32 (9-7-10-6) — Hether 8, Jeffries 5, Niehoff 2, Wimsatt 6, Allen 3, Schmitt 4, Crone 1, Barnes 3.