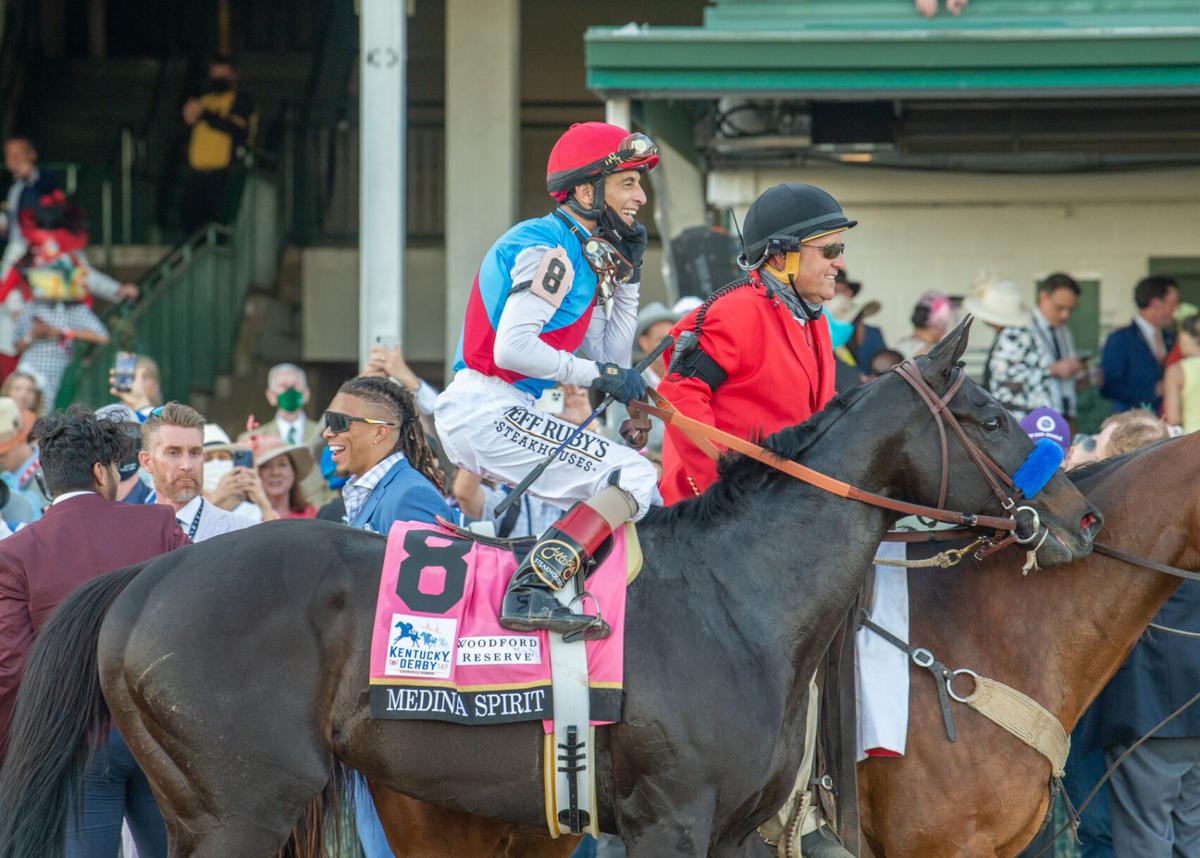 Jockey John Velazquez is all smiles after piloting Medina Spirit to victory in the 147th running of the Kentucky Derby held at Churchill Downs on Saturday. 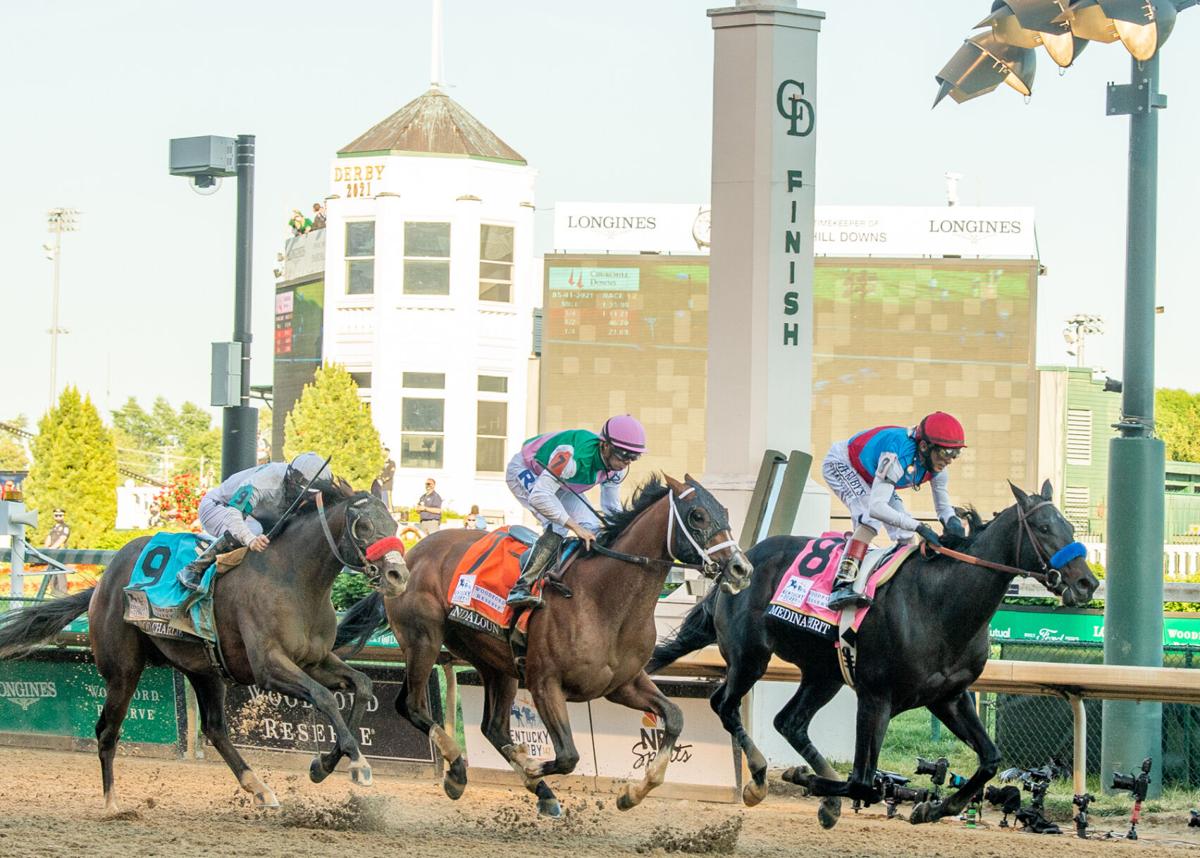 Medina Spirit (8) with jockey John Velazquez up won the 147th running of the Kentucky Derby held at Churchill Downs on Saturday. 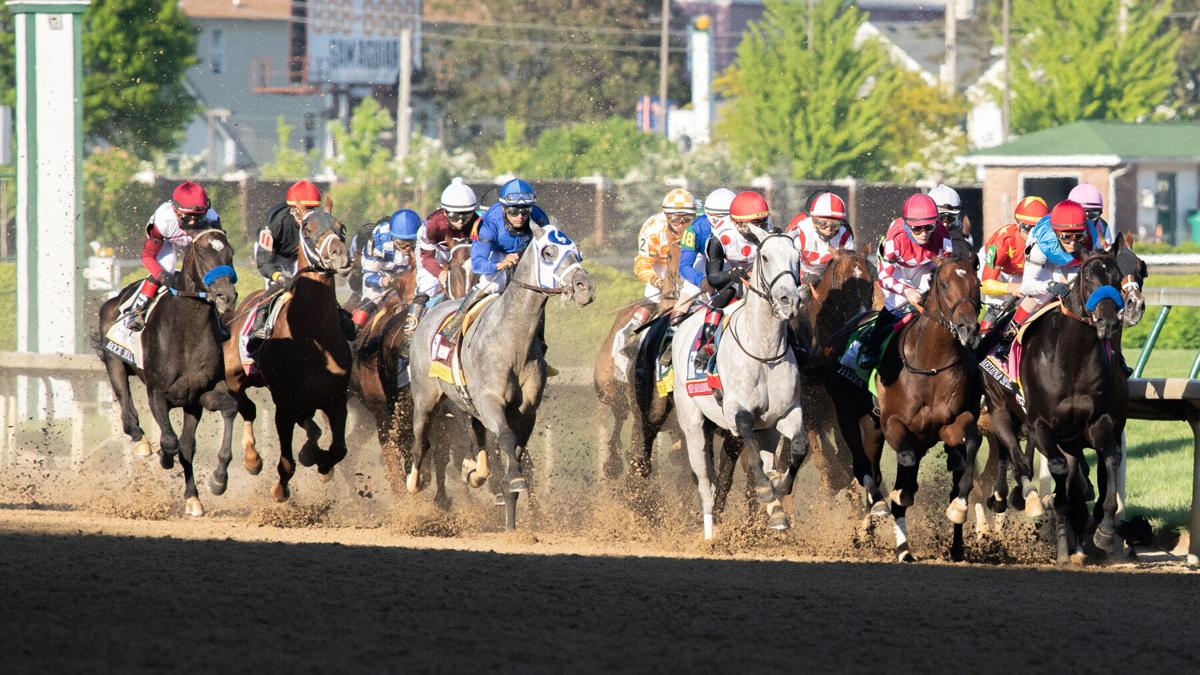 The field thunders to the first turn during the 147th running of the Kentucky Derby held at Churchill Downs on Saturday.

Jockey John Velazquez is all smiles after piloting Medina Spirit to victory in the 147th running of the Kentucky Derby held at Churchill Downs on Saturday.

Medina Spirit (8) with jockey John Velazquez up won the 147th running of the Kentucky Derby held at Churchill Downs on Saturday.

The field thunders to the first turn during the 147th running of the Kentucky Derby held at Churchill Downs on Saturday.

That’s because he was still basking in the glow of Medina Spirit’s victory in Saturday’s 147th Kentucky Derby. The triumph gave Baffert a record seventh win in the Run for the Roses.

Sunday morning at Churchill Downs’ Barn 33, Baffert held court with the media following his second straight Derby win. Talk quickly turned to the Triple Crown, which Baffert has won twice with American Pharoah in 2015 and Justify in 2018.

“Can he win the Triple Crown? I don’t know. But he’s the Derby winner, and that’s all that matters,” he said. “I was coming in here, thinking, I wasn’t sure (if Medina Spirit could win the Derby), everything had to go perfect for him. We were going to go to the lead, and see what happened. What if they challenged him? He made the lead pretty easily, for him, and the other speed horse (Rock Your World) didn’t break. That’s what it’s like in the Derby: You have to get the trip; the other speed horse didn’t get the trip.

“Going down the backside, he was doing it easy, you could tell he was enjoying himself. His ears were forward. And turning for home, they came for him, and he just dug in. I didn’t know if he was going to do it. He fought hard, and ran sort of the same race that he did at Santa Anita when he won the Robert Lewis. They came to him, and he fended them all off.”

Medina Spirit, which went off at 12-1 odds, surged to the lead early Saturday evening and held it for most of the race. Mandaloun briefly surged into the lead at midstretch to post before Medina Spirit answered back and won the 1 1/4-mile race by a half-length in 2 minutes, 1.02 seconds before a crowd of 51,838.

“When they turned for home, I was still not convinced,” Baffert said. “We didn’t start screaming and yelling until about the sixteenth pole, when it looked like it was do-able. In that last 100 yards, we all were screaming and yelling like it was my first Derby. We were like crazy, crazy. That’s what the Derby does to you. There’s no other race like it. The seven hasn’t quite sunk in yet. And to do it with a $35,000 horse. It gives people hope, keeps their dreams alive. Actually he was the cheapest yearling, since he cost $1,000. But he’s a beautiful horse, a good-looking horse.

“I stand here in front of you guys, and you don’t know how much I appreciate winning this, especially as you get older. It gets tougher as you get older. … I’d love to have 10 in there if I could, but you know that won’t happen. To have one who has a chance. To win it with him, it’s a Cinderella story, he’s just a blue-collar horse, just digging in. He reminded me of Silver Charm. … It’s another Kentucky Derby dream that came true.”

This one, however, wasn’t as expected as many of the previous races.

Medina Spirit cost only $1,000 as a yearling and owner Amr bin Fareer bin Mohammed bin Zedan purchased him for $35,000 as a 2-year-old.

“I’m the luckiest guy in the world,” Baffert told NBC immediately after the race. “His owner, Amr, I told him, ‘I think we’ve got a chance, but maybe... .’ I’m so spoiled bringing these heavy-duty horses in here, but I’ll tell you, that little horse has got a heart. Such a big heart.”

“He came back, he’s handling it quite well. He wasn’t as tired as I thought he might be. A big race like that, but he handled it quite well,” Baffert said.

Now attention turns to the second jewel of the Triple Crown — May 15’s Preakness Stakes.

“He came out of it well. It takes about a week to determine, so I’m going to come back next weekend and see,” Baffert said. “But I don’t see anything discouraging right now. Concert Tour worked well this morning (five furlongs in 1:00.60 at 5:50), I’ll sit down and talk to Mr. (Gary) West. He wants that horse to develop and we’re not rushing things. We know he’s a good horse, so we’ll see next week how he is. The thing is how they’re training. They both would have to be training well.”

Win tickets to Penny Lane at the Park

Will you shed your face mask now that the CDC says fully vaccinated people need not wear them?

New COVID-19 guidelines from the Centers for Disease Control and Prevention indicate people who have been fully vaccinated against the coronavirus no longer need to wear a face mask indoors and can mingle in crowds, be they inside or outside.