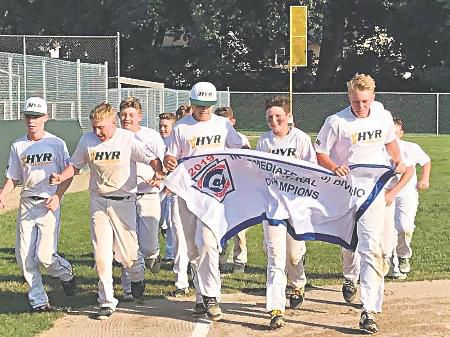 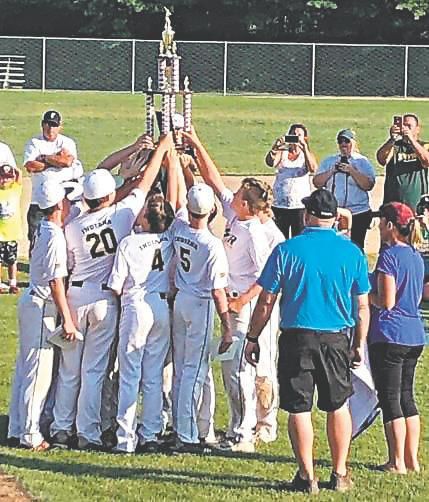 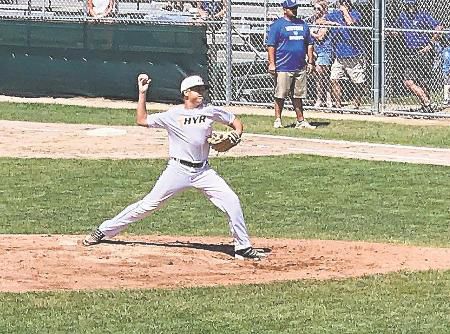 HYR pitcher Clayton Schroeder is 2-0 on the mound with a 1.62 earned-run average with 19 strikeouts in 13 innings pitched in the state and Central Region tournaments combined.

HYR pitcher Clayton Schroeder is 2-0 on the mound with a 1.62 earned-run average with 19 strikeouts in 13 innings pitched in the state and Central Region tournaments combined.

FLOYDS KNOBS — After dominant runs to state and regional titles, the Highlander Youth Recreation 50/70 All-Star team now has its sights set on a world title.

HYR begins play in the Intermediate World Series at 6 p.m. ET Sunday evening in Livermore, Calif. The final, which will be televised on ESPN2, is scheduled for next Sunday, Aug. 4.

“We’re excited,” head coach Rich Moravec said. “Hopefully we can make a run there in the tournament with the talent and experience we have on the team. It’ll come down to pitching, defense and hitting. It sounds simple, but that’s what it comes down to.”

This year, HYR steamrolled its way to state and regional championships, outscoring its opponents 130-17 along the way.

At the regional in Kalamazoo, Mich., HYR outlasted Keystone (Neb.) 8-7 in its first game thanks to Justin Early’s walk-off hit in the bottom of the eighth inning. HYR then avenged last year’s loss to Ankeny by beating the Iowa state champion 12-7 in its second pool-play game. HYR left no doubt after that, winning its final four games by a combined score of 48-1, capped off by a 15-0 blowout of Commerce (Mich.) in the final.

“The big key, I think, to the success has been the fact that we have five 13-year-olds who were 12-year-olds [on the team] last year,” Moravec said. “They were one game away from going to the World Series last year. Five of them came back, they’ve really been the heart and soul of the team.”

“Those five have really been the key to the overall success of this team,” Coach Moravec said. “A couple of them have really stepped up with their leadership and have taken charge of the team. As a coach that’s what you want to see, it makes your job easier. They’re just coming together as a group. You can see it, the bonds are being formed and it’s fun to watch.”

In all, the team is comprised of 10 eighth-graders-to-be and three seventh-graders-to-be. Eleven of the players are students at Highland Hills Middle School while one (Wesley Taylor) attends Corydon Central Junior High and another (Tate Timberlake) is a student at North Harrison.

“As an assistant coach last year, and as the head coach this year, just sitting back watching them, it’s been a dominant run,” Moravec said. “We’re just scoring like crazy.”

The pitching hasn’t been bad either, especially in the final two games of the regional tournament. In HYR’s 7-0 victory over Western (Ky.) in the semifinals, Schroeder pitched a complete-game, two-hit shutout while walking two and striking out eight in seven innings. In the final, Newkirk tossed a complete-game shutout of his own, allowing two hits while striking out six in HYR’s 4-inning win.

HYR arrived in California on Friday morning after flying out of Cincinnati at 6 a.m.

“We’ve been on the road almost three weeks,” said assistant coach Eric Jacobi, who has created a Go Fund Me page to try to raise money for the team’s travel expenses.

All 12 World Series teams will attend tonight’s Texas Rangers at Oakland A’s game and will take the field for the WS opening ceremonies.

“It’s going to be a totally different environment,” Moravec said. “I’m sure they’ll be all bright-eyed and taking in the scenery.”

HYR will face West Region champion Petaluma (Calif.) American at 6 p.m. Sunday evening. If HYR wins, it will face host Livermore/Granada Little League at 9 p.m. Monday night. If it loses its first game, HYR will play at 6 p.m. Tuesday. The United States championship is scheduled for 8 p.m. Saturday night Aug. 3 while the World Series final is slated for 9 p.m. next Sunday night.

The 2017 HYR team went 0-3, losing its first two games to the East and West Region champs (who eventually played each other for the U.S. title), at the World Series.

“I think we need to stick with our formula, which is really good pitching, excellent defense — we have an excellent shortstop in Kayden Linares, he’s made some great plays — and hitting, we’ve had some clutch hitting,” Moravec said.