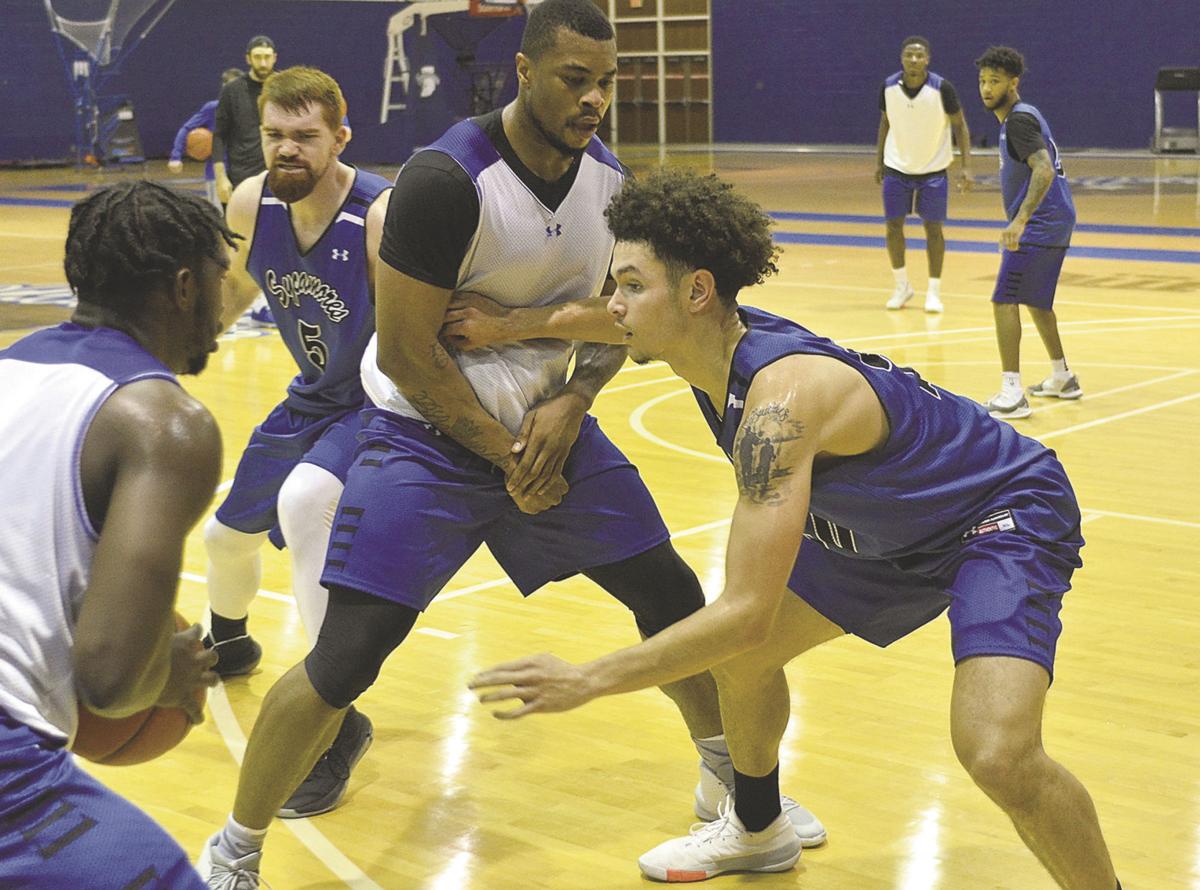 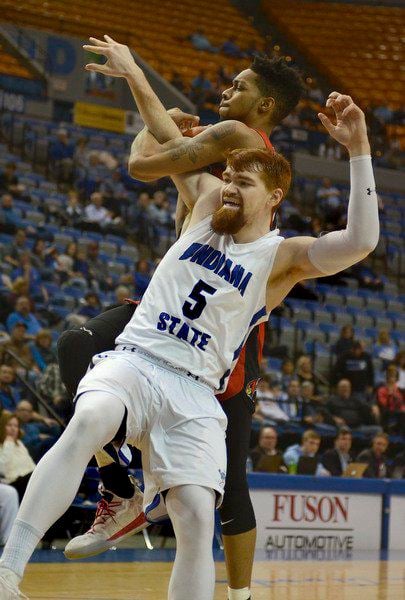 Didn't give up tangled up: Indiana State's Bronson Kessinger doesn't give up trying to snatch a rebound from Illinois State's Phil Fayne during the Sycamores' win last season in Hulman Center. 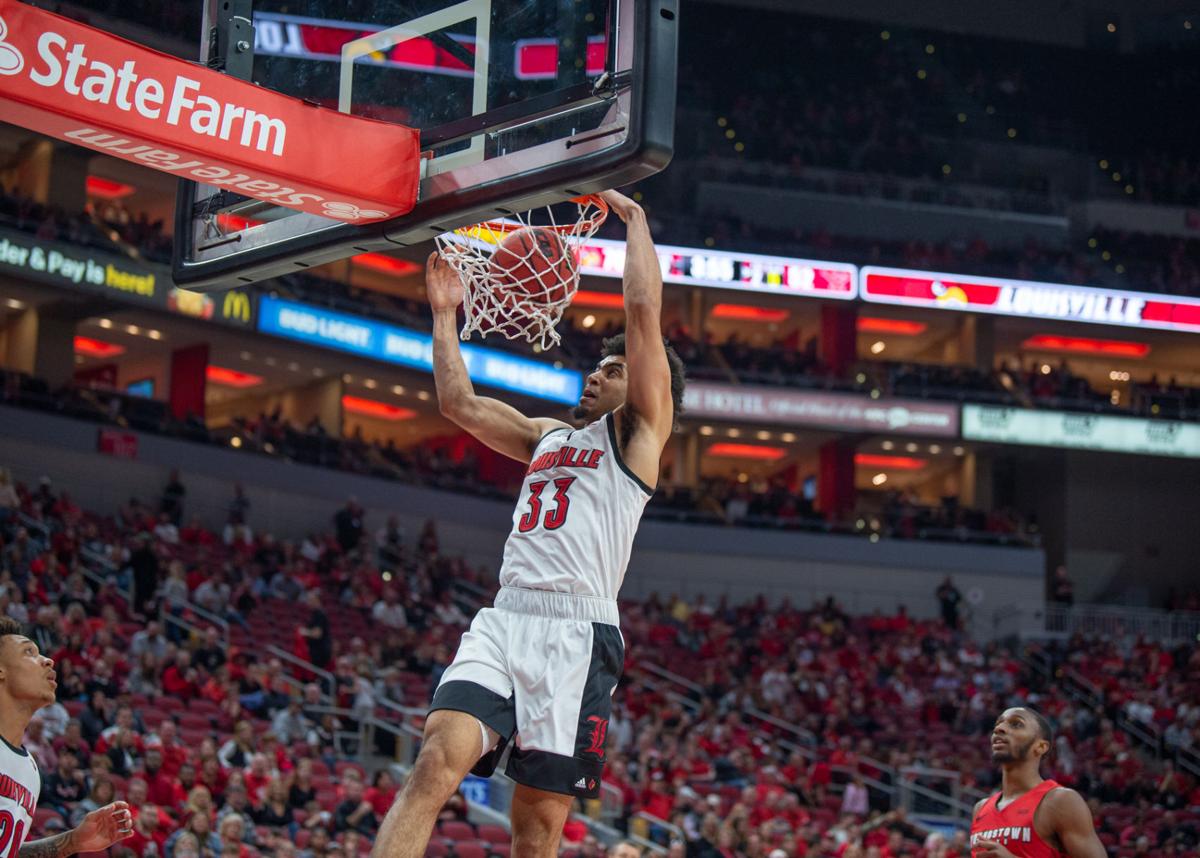 Louisville forward Jordan Nwora jams the ball during the Cardinals' 78-55 win over Youngstown State at the KFC Yum! Center on Sunday. Photo by Joe Ullrich

Didn't give up tangled up: Indiana State's Bronson Kessinger doesn't give up trying to snatch a rebound from Illinois State's Phil Fayne during the Sycamores' win last season in Hulman Center.

Louisville forward Jordan Nwora jams the ball during the Cardinals' 78-55 win over Youngstown State at the KFC Yum! Center on Sunday. Photo by Joe Ullrich

Indiana State's men's basketball program isn't just taking on No. 4 Louisville on Wednesday night at Louisville's KFC Yum!! Center, a task that's daunting enough in its own right, but it's facing down one of the great basketball cultures in the country.

Kessinger is actually from Meade County, Ky. originally — his family moved to Corydon when he was five — and he admits that the culture of Kentuckiana basketball still pulls at his heart strings.

Kessinger has another connection to Louisville through former Cardinals guard Kevin Ware. When Kessinger broke his leg during his high school career in 2015, Ware — who suffered a similar catastrophic leg fracture in the 2013 NCAA Tournament — reached out to offer support to Kessinger.

"I grew up watching the greats at Freedom Hall and even the first year of the Yum! Center. It's pretty special to me [to play at Louisville] and I have a lot of friends and family coming to see me," added Kessinger, who said Earl Clark was his favorite Cardinal.

Barnes, on the other hand, believes the thing that outsiders don't understand about Louisville-area basketball is how tough and competitive it is.

The college programs — Louisville, Kentucky and Indiana all have significant followings — may be the pinnacle of the passion, but he believes basketball runs so deep in the culture. He's ready to go home and embrace it.

"It's great. I have a lot of people coming out. It's a basketball place, a basketball school and a basketball city. The whole Kentuckiana area is all basketball. People think we're soft, but when I was in high school, I only lost to one school up north. It's big-time down there for sure," Barnes said.

Why does the culture ISU will face matter? After all, games are settled on the court, right?

The culture likely wouldn't matter if this was a stand-alone buy game, but ISU got a taste of another rich basketball culture — Dayton — and acquitted themselves just fine went thrown into a pit of Flyers fans to face a talented Dayton team last Saturday. The Sycamores had a chance to tie the game on their final possession before they suffered an 86-81 loss.

Louisville (2-0) presents problems of its own, but the fact that the Sycamores demonstrated that they didn't blink gives them confidence they'll be able to handle another set of rabid fans at the Yum! Center.

"Starting the season out facing a crowd of 15,000 [at Dayton] is a big shock, but it's a big prep thing for us going into an even bigger environment. It can only help that we've faced a large crowd and it should help us. We didn't get the win, but it was important for us to do what we did at Dayton," ISU guard Cooper Neese said.

The biggest problem Louisville presents is forward Jordan Nwora, the ACC Preseason Player of the Year and All-American candidate. Like Dayton's Obi Toppin, Nwora considered declaring for the NBA last spring, but decided against it at the last minute. Nwora isn't the athletic dunk machine Toppin is, but he's arguably more versatile. He can score in every manner and tends to thrive against smaller defenders. Nwora will also punish careless ballhandlers by jumping passing lanes.

The big headache for Louisville is 6-foot-10 center Steven Enoch. He's averaging 14 points and 10 rebounds so far. He's not athletic like Toppin, but is hard to move out of the lane. ISU would like to get more productive minutes from Chris Agbo to counter the threat.

ISU will also have to have a repeat of its mostly mistake-free, patient approach on offense it used so well against Dayton. Louisville is likely to be ready for Tyreke Key's sorties into the lane, but it will be important for ISU to try and draw fouls as, for all of its strengths? Louisville isn't a team blessed with experienced depth.

"We faced a lottery pick in Obi and now we get another [Nwora] tomorrow night. They're talented across the board. We have to try to keep getting better. We'll be prepared for what they do, but we really have to do the fundamental things better than our opponent. We have to knuckle down," ISU coach Greg Lansing said.

"I saw a lot of optimism in [what ISU did against Dayton]. We got down 12 in the second half, and I feel like some of the teams I played for here in the past would have folded, but with the new guys and the way we fought back put Dayton on their heels. It makes me feel optimistic going into this one," Kessinger said.

• Hankins to redshirt — Lansing confirmed that freshman Jared Hankins will sit out the season as a redshirt. The Indianapolis native signed with the Sycamores a year ago.

Signing day is today for the 2020-21 class. Lansing anticipates having the Letters Of Intent from Julian Larry, Nick Hittle and Kailex Stephens today.

ISU at No. 4 Louisville

Should Indiana legalize use of marijuana?

States are all over the map — literally — when it comes to marijuana laws. States where use is fully legal — there are 11 of them, plus Washington, D.C. — jut up against neighboring states where lighting up a joint is criminal. So where does Indiana stand? CBD oil is OK, but that's it. How about our neighbors? Just days ago, the Kentucky House approved legislation to legalize medical marijuana. Michigan legalized use, including recreational, in 2018, followed by Illinois in 2019. Ohio has reduced criminal penalties and made it available for treatment of 21 medical conditions.