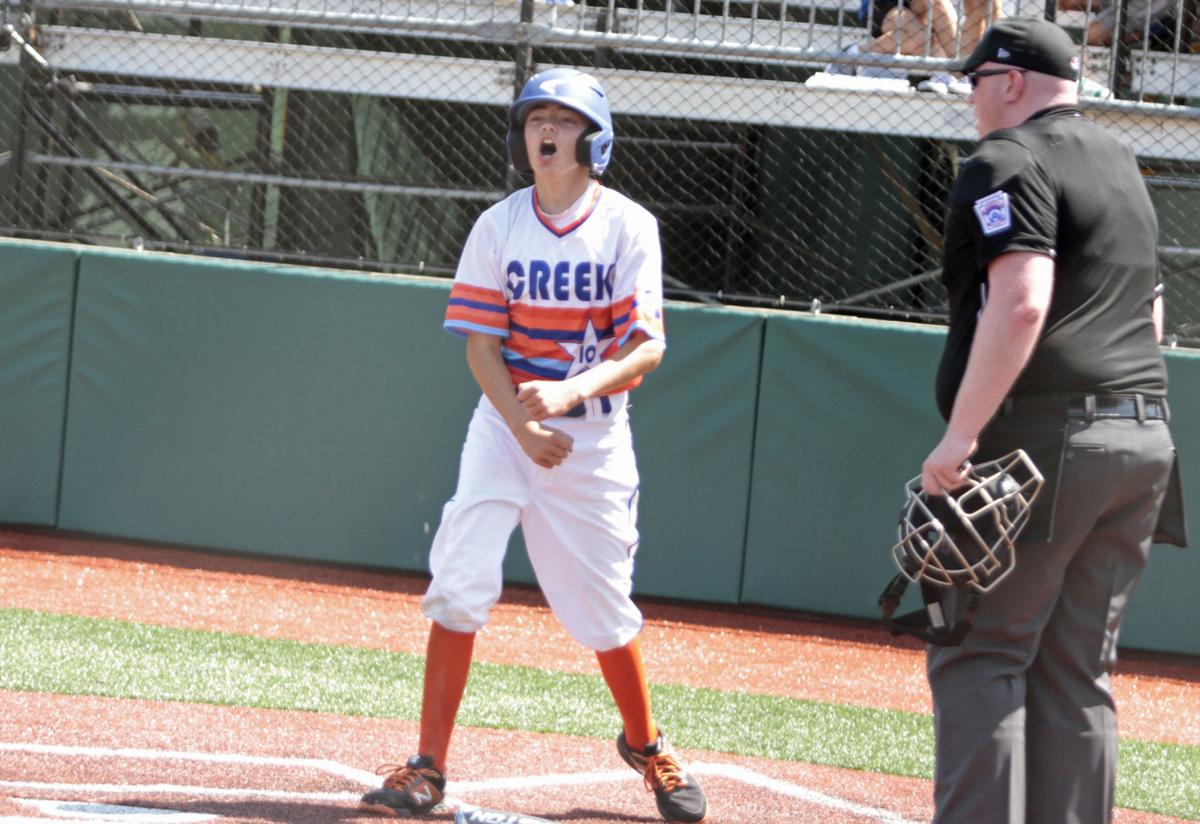 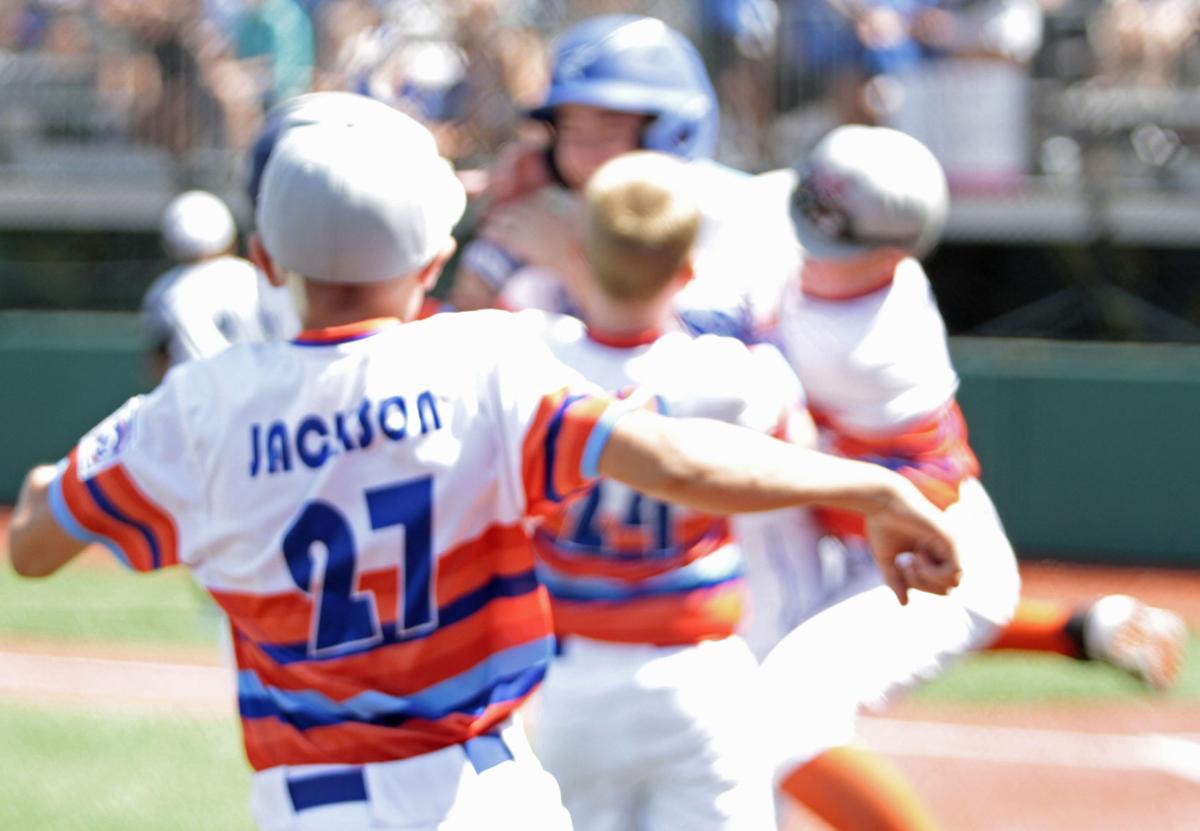 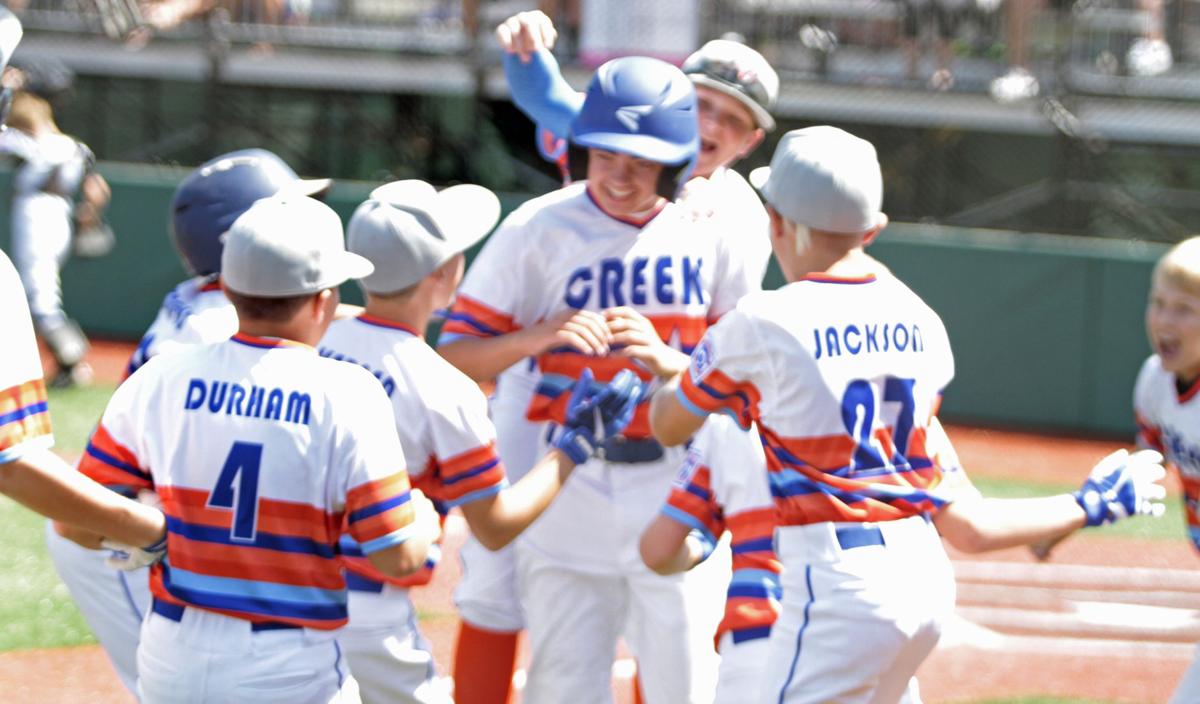 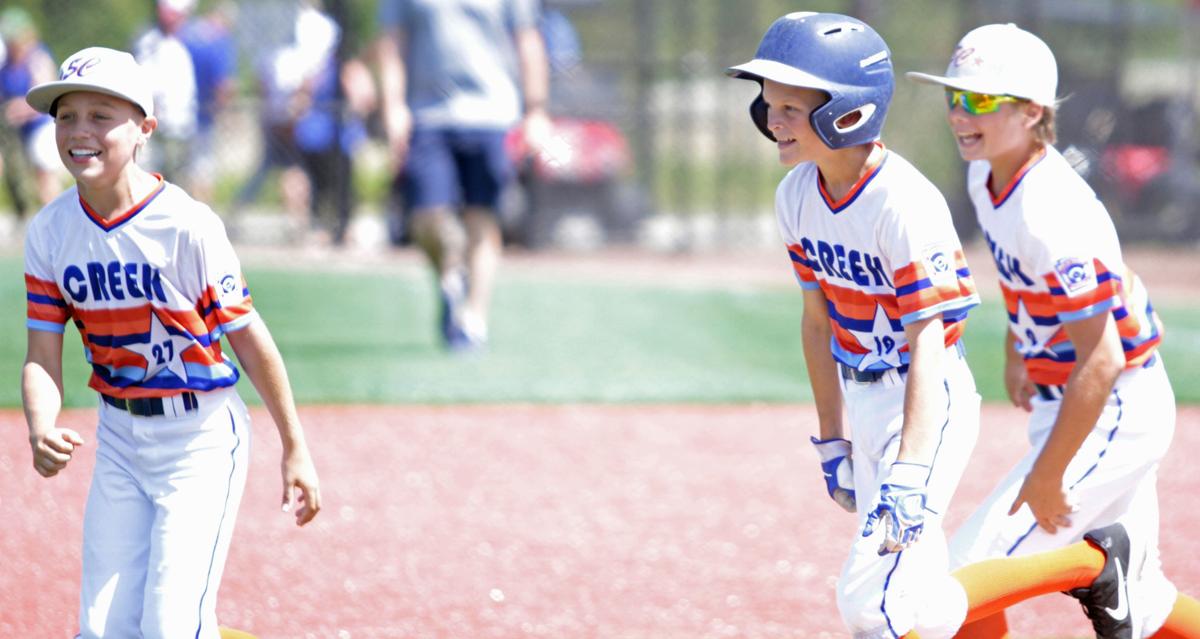 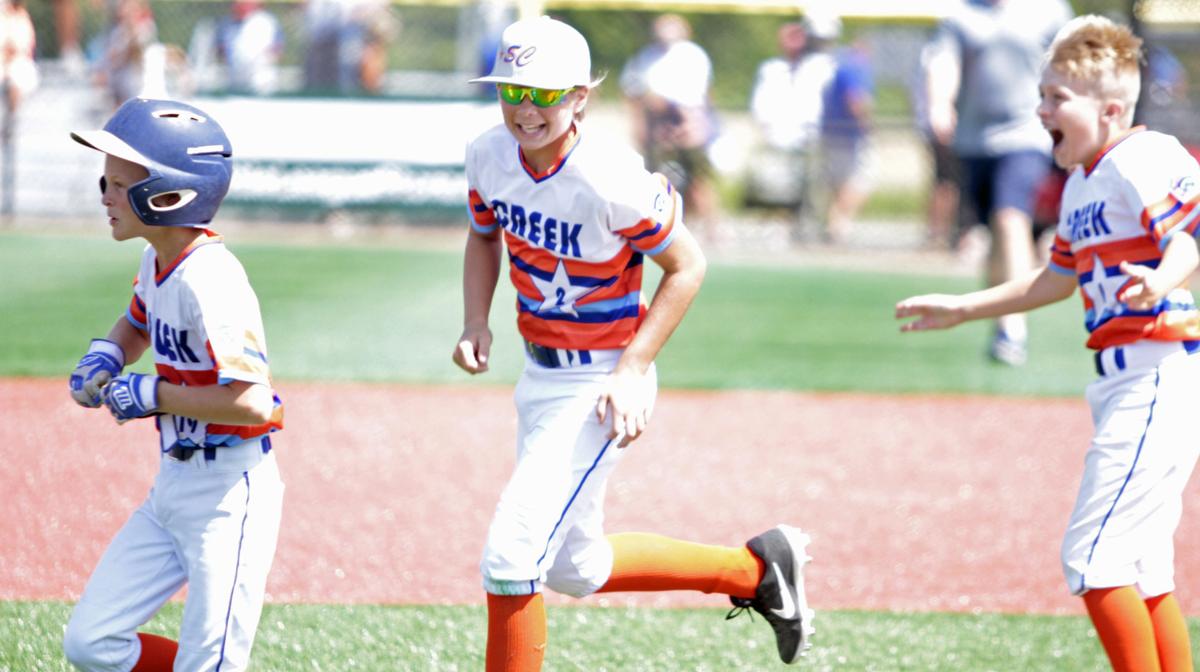 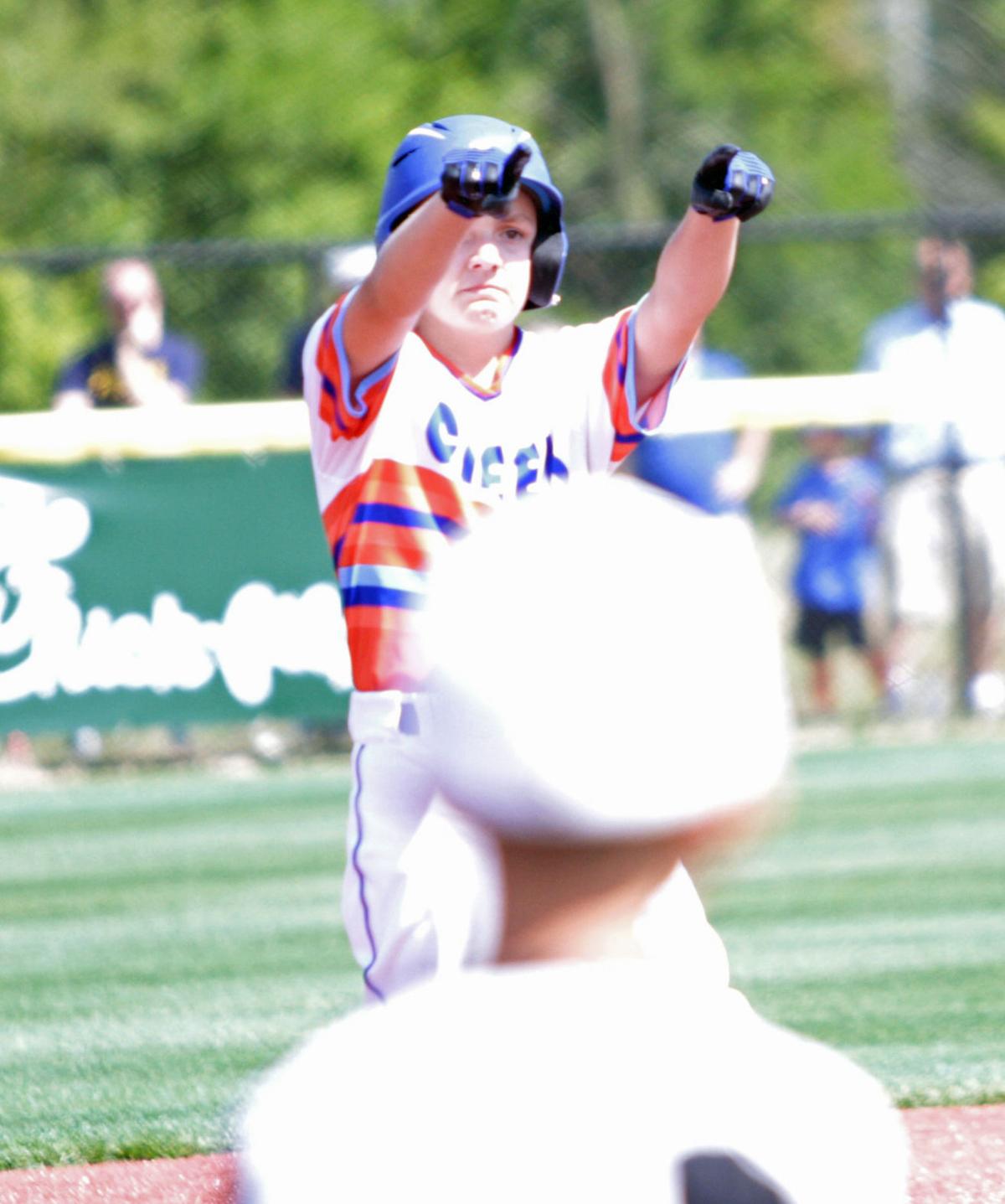 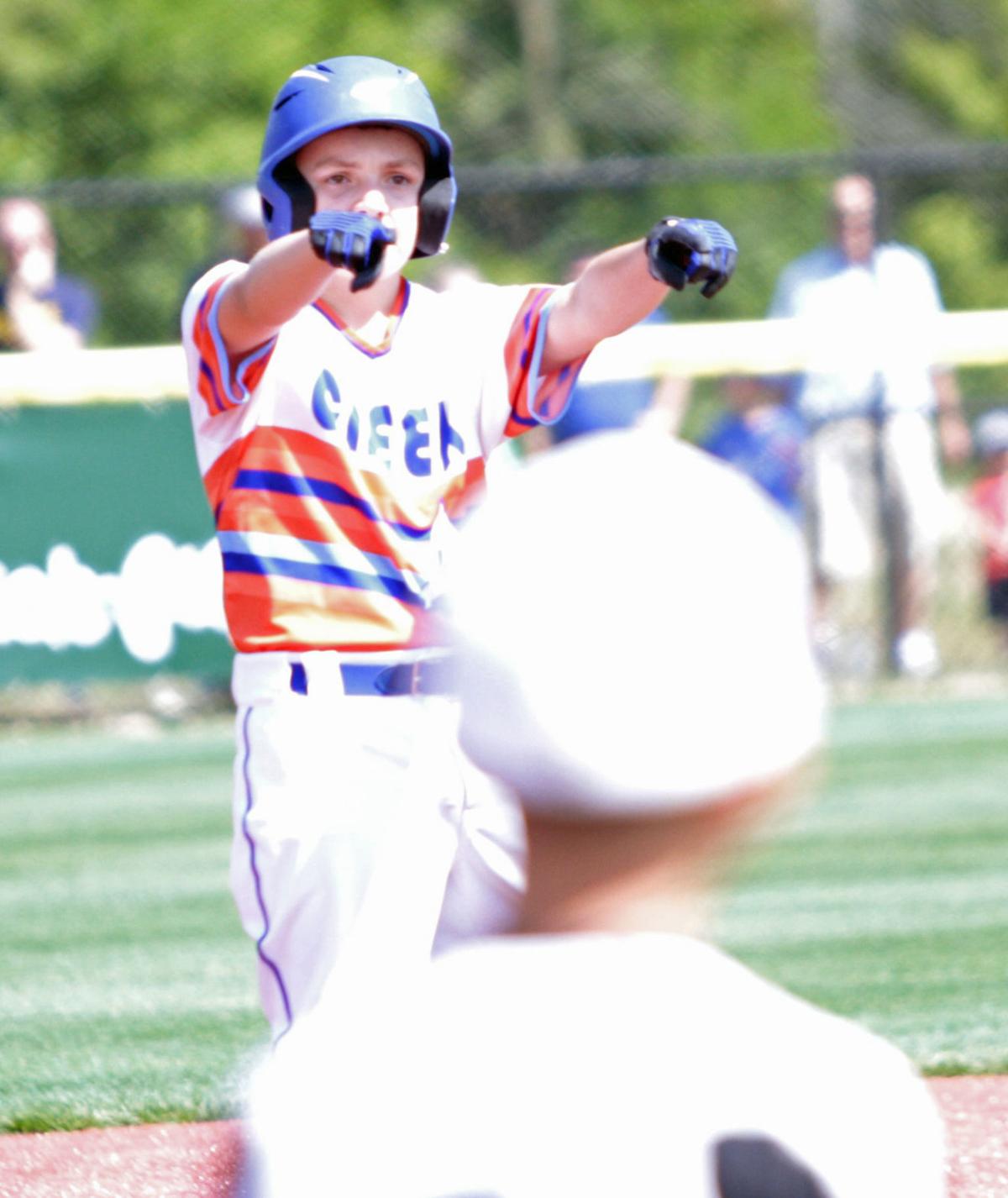 On a dropped third strike in the bottom of the seventh inning, Preston Burton scampered home with the winning run to cap off Silver Creek’s late comeback and give the team a 4-3 victory over West Side (Ohio) in the first game of the Great Lakes Regional at the Grand Park Sports Complex.

“It’s a resilient bunch of kids,” said Silver Creek manager Damon Lewis, whose team won its first district title in 25 years and its first-ever state title last month. “They don’t know any different. They just go out there and battle every inning. They pick each other up. Some of our better players might struggle and the other guys pick each other up. It was just a total team effort, and a lot of fun. It was a great game. That Hamilton [Ohio] team, they’re top-notch, so I’m really happy.”

Silver Creek doesn’t have much time to enjoy the victory, though. It will face Kentucky state champion Bowling Green Eastern, which produced the Great Lakes champion in 2015 and ‘16, at 10 a.m. Monday morning.

“We have heard a couple things about Kentucky. They’re pretty good defensively and they get a lot of base hits, so we’ll be ready for them,” Burton said.

Burton, who has been dominant on the mound during the All-Star season and entered the game with a 0.36 earned-run average, started the game for Silver Creek and got through the first three innings unscathed.

In the top of the fourth, however, he allowed three runs — two more than he’d allowed in 16 2/3 innings coming in.

Burton gave up a leadoff single, before hitting a batter and walking another to load the bases with two outs. Then, West Side pinch-hitter Xander Arnold laced a two-run single to center field. The next batter, Brooks Treadway, then appeared to ground out to end the top half of the inning. However, a video replay review revealed that Treadway beat Ross Jackson’s throw from shortstop, allowing another run to score and boost West Side’s lead to 3-0.

It stayed that way until the bottom of the fifth, when Karson Cook reached on a one-out error, then moved to second on Burton’s infield single. That brought up Cullen Garloch, who came through with a two-run double to center field.

“He’s been hitting the ball real well in practice, and in the cage, the last couple of weeks. We knew he was due for something,” Lewis said. “He loves that fastball; he sees that fastball and his eyes get real big. Very rarely does anybody sneak one by him. He hit a rocket out there.”

“I was really just so happy,” added Garloch, who had relieved Bryce Kernen (who had relieved Burton in the fourth) in the top of the fifth. “He threw me two curveballs and I was sitting on the fastball.”

Back on the mound, Garloch retired West Side in order in the top of the sixth to keep Creek close.

In the bottom of the inning Jack Murphy led off with a single to center field before moving to second when Spencer Durham reached on an West Side error.

West Side starting pitcher Connor Cuozzo then had to exit after reaching the maximum number of pitches. The right-hander, who struck out 10 over 5 1/3 innings, was relieved by Matt Ponatoski, whose wild pitch allowed Murphy and Durham to each move up before he walked Bryce Kernen to load the bases. West Side then went to its third pitcher of the inning, Cam Carter. Cook, who entered the regional hitting .133, greeted him with a single to right field that scored Murphy. Durham also tried to score on the play, but he was tagged out at the plate — a play that was upheld by video replay.

“That was a must-challenge at that point,” Lewis said. “I don’t question the choice to send him. Spencer’s a great baseball player, he knows how to slide, he knows how to get down the line, he knows what he’s doing. They made a great throw and they applied the tag right as he got there. It was a bang-bang play. It didn’t go our way, but that’s alright because it worked out for us in the end.”

The call, meanwhile, spurred Garloch on the mound.

“After that emotional moment when Spencer was thrown out at home, I was just so upset that I was throwing it hard,” he said. “I was getting in there and I was throwing strikes and I felt great.”

In the top of the seventh, Garloch retired the first two West Side hitters before giving up a triple to Cuozzo. Garloch got out of the jam, though, when he got the next batter, Cade Bowling, to fly out to Kernen, who replaced Jackson Lewis after the latter was hit in the shoulder while swinging at a pitch in the sixth.

In the bottom of the seventh, Burton, who was visibly upset after giving up a trio of runs to West Side in the fourth, stepped to the plate.

“I knew he was due,” Lewis said of Burton, who entered the game hitting a team-high .552. “I just told him, ‘Preston, you don’t have to end this game with one swing. You’ve got guys behind you that can get you in. We’ll figure out a way, you’ve just got to get on base.’”

He did just that, doubling to left field.

“He threw me a fastball low on the pitch before, then he brought the next one up a little bit,” Burton said. “All year I had been struggling on those, so I’m glad I finally got to get one in the air off a low pitch.”

Added Lewis: “He turned on that fastball and just ripped it. He’s so fast once he gets those big long legs moving it’s hard to slow him down. I was surprised he didn’t go to third. I’m kind of glad he didn’t. I’m glad he held up, because it worked out.”

Burton moved to third on a wild pitch, then scored moments later after Garloch’s swinging strikeout got past the West Side catcher and went to the backstop.

“It was just a flash,” Burton said. “I just remember seeing Cullen swing and miss, the ball goes to the backstop and I just took off and slid into home — then all my teammates came and trampled me.”

“I told Cullen he had a walk-off strikeout,” Lewis joked afterward. “And they were all razzing him back in the dugout about it, but that’s the game. Players make plays, somebody’s got to lose. It could’ve gone either way and luckily today it went our way.”