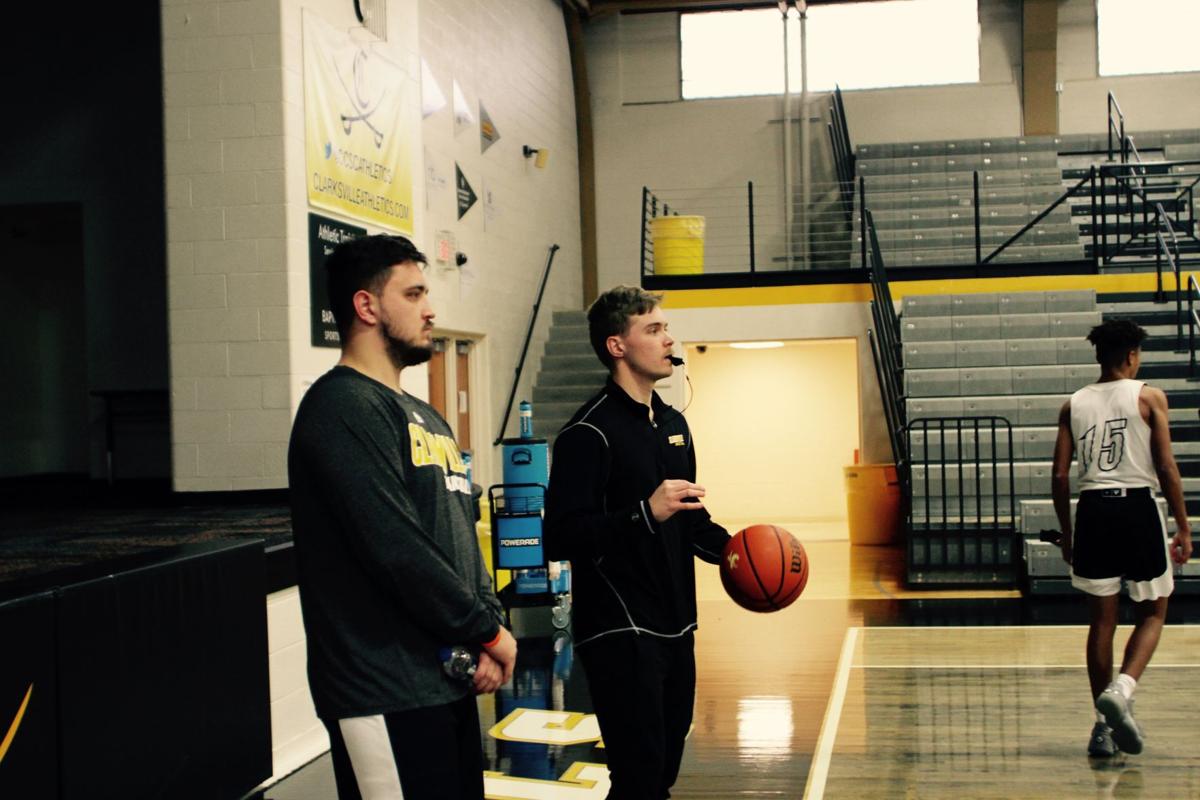 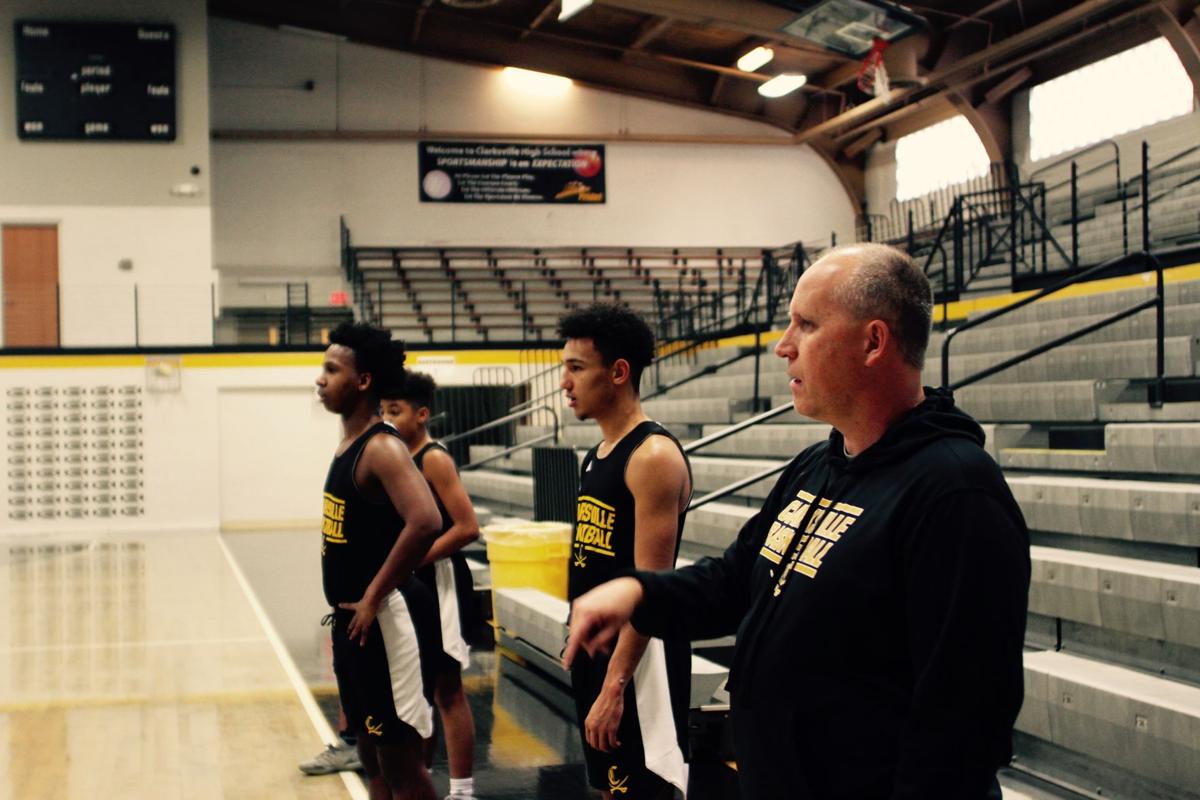 Clarksville junior Connor Page was an impressionable 11-year-old roaming around the high school gym watching the Generals rack up 23 wins in 2014.

That era was one of the most successful in school history. Two of the five sectional championships in the history of Clarksville boys’ basketball and the only regional championship came during the playing careers of Aiden and Cal McEwen, who are now Page’s assistant coaches.

“The energy in the building when they were playing and the passion they played with out there [stood out]. They bring back the experience and know what it takes to get to that level so it can help us get back to that level,” Page said.

The high-energy duo left the Generals’ program ranking second and third respectively on the school’s career scoring chart. Now, their focus is on helping their father, Brian McEwen, return the Generals to championship form.

Clarksville (5-4) is one win from matching last year’s win total and the McEwens would love to get that sixth win tonight against rival Providence — a rematch of the Pioneers’ 53-50 win in the Silver Creek Holiday Tournament seven days ago.

The other three losses for the Generals are all to teams ranked in their respective class — 3A No. 1 Silver Creek, 4A No. 8 Floyd Central and Class A Loogootee.

“It’s a process but we’re getting there,” said Aiden McEwen, a 25-year old graduate of IU Southeast. “The first half has been a bear, but as we get into the mainly conference schedule, we’ll try to pick up some wins here and there.”

Cal McEwen, 23, was the inaugural NTSPY Boys’ Basketball Player of the Year in 2014 as a senior. Sophomore guard Dakota Capps had Cal as his eighth-grade coach and the McEwens have shown the current team film of that 23-win 2014 team that came up one game short of playing for a state title.

“I model my game, my mindset to be like coach Cal’s. They know what success is like and what we have to do to be successful and they’re on the same page. If we buy in, I feel like we’ll be really successful,” Capps said.

Capps, Dae’von Fuqua, Jaren Starks and Keyshawn Minor give the Generals a core group of guys capable of creating offense — the focus is on becoming a quality defensive team as well.

“We have stretches where we play well. We’ve never really struggled to score the ball. Defensively is our biggest key. What we lack in size we make up for in quickness and speed,” Aiden McEwen said.

The McEwens are working to create some great chemistry on the floor. They feel like they have a pretty strong working relationship on the bench, whether they’re making in-game adjustments or studying film and preparing a game plan.

“We can look at it simultaneously and look at it in different spots. You just bounce ideas back and forth. For me, they have a lot of pride in our program. They’re not afraid to hurt my feelings. Instead of other coaches, an assistant might not tell the head coach the truth,” Brian McEwen said. “They don’t want our program to fail, they don’t want our coach to fail and they don’t want their dad to fail. It’s enjoyable because I get to spend time with my sons.”

Aiden, who played one year at Taylor and finished his career with a season at IU Southeast, is loving it.

“It’s nice to be at home again, be around them and be around the game we love and has given so much to us,” Aiden said.

Cal McEwen said there’s mutual respect. Their father helped them develop as players — during their formative years as a dad in addition to being an assistant coach for the Generals. Now, he’s helping them develop as coaches.

“It’s definitely been beneficial with our dad being the head coach,” Cal said. “The conversations are honest. The direction we feel the program is going and the direction we’d like for it to go in and what we need to do to take it there. And the kind of head coach he is; he’s not ‘I’m the head coach, you guys sit down and let me do it. He lets us make in-game adjustments and everything.”

The discipline Brian helped his sons develop to become successful players, he’s watching his sons look to instill in their players.

“He wasn’t soft on us. He made sure we did things the right way and helped us learn that. Now as young coaches, we’re trying to help these young men to learn to do the right way. When it comes down to it, when you’re doing stuff the right way, it’s more fun,” Cal McEwen said. “If you’re not used to it, it’s a little bit of an adjustment. When you’ve got a group of guys that will go out and practice four days a week and on game nights Friday and Saturday compete to the best of their god-given ability and give themselves to each other, that’s when it’s fun but also when you start reaching goals like winning a sectional and maybe a regional. Hopefully we get another one of those.”

The current Generals know a little bit about those

"We definitely have a good connection with them,” Cal said. “Showing these guys that we can still play a little bit. When you can actually show them what you're telling them to do, it adds some credibility.”

That and the passion for teaching the game.

“If you’re passionate about something, you're going to enjoy doing it. You’ll have some days, where you’re not going to have the best days, but you’re doing it with people you love doing it with. It’s a spark you can bring every single day. These guys might have a bad day walking through the halls, you don’t know what’s going on. You never know what kind of impact you can have on somebody, even something as small as coming into practice and having some enthusiasm.”