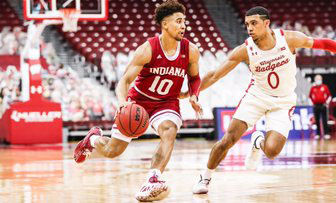 Indiana guard Rob Phinisee looks for room against the Wisconsin defense during the Hoosiers’ 80-73 double-overtime loss to the Badgers on Thursday night at the Kohl Center. 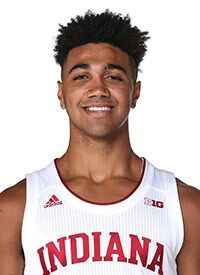 Indiana guard Rob Phinisee looks for room against the Wisconsin defense during the Hoosiers’ 80-73 double-overtime loss to the Badgers on Thursday night at the Kohl Center.

MADISON, WISC. — Through two overtimes, some questionable calls and wild momentum swings, Indiana was in position to break its 17-game, 22-year losing streak against No. 8 Wisconsin at the Kohl Center on Thursday night.

The Hoosiers, however, were unable to come up with the one shot or one stop to finish the game off, and ran out of gas in an 80-73 double-overtime loss to the Badgers.

Then, at the end of the first overtime, with the score tied at 69, IU guard Al Durham was tied up by Wisconsin guard Brad Davison on the busted set play, when point guard Rob Phinisee flashed too close to him.

“We wanted to give Al Durham an opportunity to see if he could maybe clear it out on that left side,” Indiana coach Archie Miller said. “I think they must have done a really good job of keeping him from being able to get by. But we didn’t execute out of the time out to be able to keep the spacing, I think. The bottom line is they tied it up.

“Not being able to get that shot at the end of the first overtime was disappointing, but it ends up going to double overtime so we had our chances there as well.”

In the second overtime, with Wisconsin up 71-70, Tyler Wahl made back to back 3-pointers to extend the Badger lead to 77-70. By then, an IU team already playing without second-leading scorer Armaan Franklin was gassed. Jackson-Davis, who logged 49 minutes, posted his fourth double-double of the season with 23 points and 12 rebounds. Durham added 15 points and Phinisee added 10 points and 6 assists, whie forward Jerome Hunter chipped in with 12 points off the bench. Durham and Phinisee both played 48 minutes.

With junior forward Race Thomson and Hunter in foul trouble early, the game nearly got away from the Hoosiers early. After Hunter sank a 3-pointer to give Indiana its first lead, 11-9, Wisconsin answered with a 15-0 run, taking advantage of defensive breakdowns with inexperienced played on the court. Ford scored eight points for Wisconsin during the run, including a transition layup that put the Badgers up 24-11.

“I was proud of the way we competed, in particular the way that we were able to handle some adversity throughout the early part of the first half to grind away and stay in the ballgame,” Miller said.

But every time, Indiana converted on a big shot, Wisconsin answered.

“They made a lot of winning plays at the end and we didn’t make enough winning plays in the end, and that’s what it takes in this league,” Miller said.

Leal, Indiana’s 2020 Mr. Basketball, scored a career-high 9 points, going 3 of 6 from 3-point range. “He showed the winner he is tonight,” Miller said. … The loss dropped IU to 0-4 against ranked teams this season. …. In his pregame radio show, Miller said that Franklin will be out, “for the foreseeable future.” IU next plays Sunday at Nebraska.

Should the death penalty be abolished in the United States?

The 13th execution since July occurred early Jan. 16 at the Federal Prison Complex in Terre Haute. The number of federal executions carried out since 2020 exceeds the previous 56 years combined. Incoming president Joe Biden, who opposes the death penalty, could stop federal executions after he takes office.