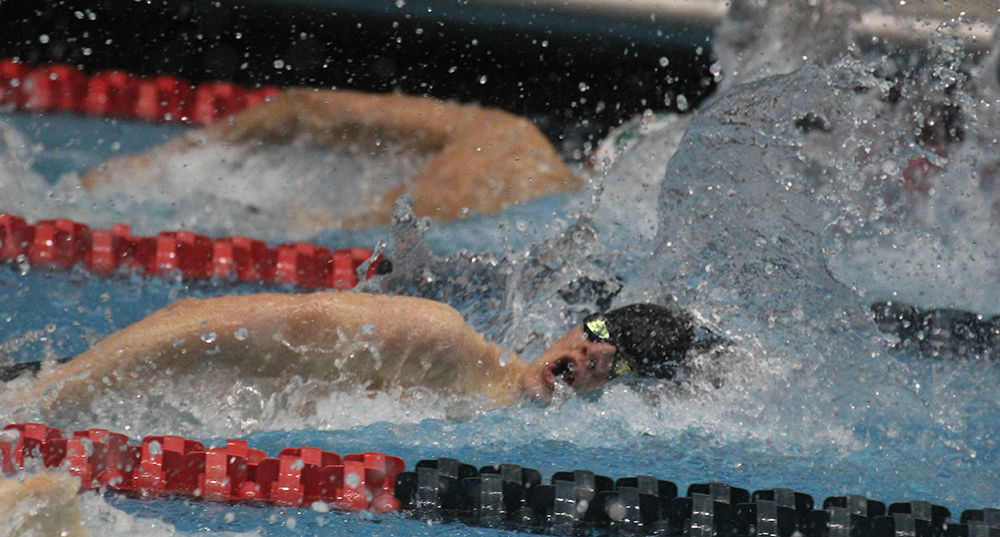 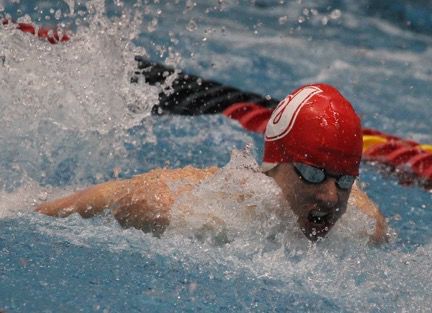 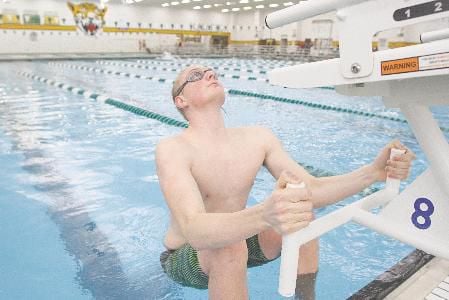 Floyd Central junior Dalton Lawver is seeded 17th in the 100-yard backstroke in the IHSAA State Finals, which begin Friday at the Indiana University Natatorium on the IUPUI campus.

Floyd Central junior Dalton Lawver is seeded 17th in the 100-yard backstroke in the IHSAA State Finals, which begin Friday at the Indiana University Natatorium on the IUPUI campus.

Several area boys had very good seasons in the pool. Three, however, made the biggest waves.

Floyd Central senior Henry Lang and a pair of juniors — Floyd’s Dalton Lawver and Jeffersonville’s Carter Dilger — set themselves a part from the rest.

Those three are the finalists for the Boys’ Swimmer of the Year, which will be announced at the News and Tribune Sports Performance Yearly (NTSPY) Awards ceremony June 18 at Eastside Christian Church in Jeffersonville.

The junior had a very solid season.

“I think I did really well and overall as a team we were small in numbers, but we were able to pull off a lot of good swims and qualify a lot of guys for state, which was our main goal,” Dilger, a repeat finalist, said. “I was able to swim some fast times and I was glad for it and how it turned out at the end of the year.”

At the Hoosier Hills Conference meet he won the 100-yard butterfly (in 55.10 seconds) and was fourth in the 200 individual medley.

“Going into it, it’s just one of my better events and I’m glad I can swim it, so I go there and just try to do my best. I had really good competition against me and I was able to get first, so I was glad for that and to be able to go to state,” said Dilger, who was also second in the 200 IM while helping the Red Devils to a runner-up finish in the 200 medley relay and a third in the 400 freestyle relay at sectional.

A week later at the IHSAA State Finals, he finished 21st in the 100 fly and helped Jeff’s 200 medley relay team to a 23rd-place finish.

“My state meet was pretty good,” Dilger said. “I was able to go about the same times as I did at sectionals. We weren’t able to make it back as a team on the relay, or me individually, or our other individual swimmer, Kelly Padgett, but overall we did really well and I enjoyed it a lot. It was a good experience to race the best in the state for sure.”

And Dilger still has one more year of racing left.

“I’d like to just keep getting faster and see what our team can do next year with the guys we’ve got returning, and hopefully get as many people to state as we can," he said. "For sure [for] me to try to quality for state again, that’d be great."

Lang had a sensational senior season.

At the Hoosier Hills Conference meet Lang won the 200 freestyle, was a member of the Highlanders' victorious 200 free and the 400 free relay teams and also finished second in the 100 freestyle.

In the sectional, Lang won four events. He captured the 200 freestyle by edging teammate Dillon Freiberger and the 100 free by beating another teammate, Noah McIntire. He was also a member of the victorious 200 free relay team, along with McIntire, Tristan Deaton and Carson Huber, as well as the triumphant 400 free relay team that also included Dalton Lawver, Christian Salinas and Huber.

A week later at the IHSAA State Finals, Lang finished 23rd in the 100 freestyle and 24th in the 200 free. He also helped the Highlanders’ 200 and 400 free relay teams to 14th-place finishes.

“I felt very accomplished in how I swam,” Lang, a repeat finalist, said. “There were records broken on the relay side. I have forged many bonds with teammates that I know will last far beyond my high school career. In the future I will definitely stay in contact with my teammates and the friends I’ve made. I’m very grateful to be on the Floyd Central swim team.”

Lang will continue his swimming and academic careers at Centre College in Danville, Ky.

“I plan on majoring in a chemistry-related field. I plan on going into the 3-2 or 4-2 engineering programs and pursuing a chemical engineering degree,” he said before adding his goals for in the pool. "I plan to try and shoot for All-American."

The junior had an impressive season.

At the Hoosier Hills Conference meet, Lawver was a member of the Highlanders’ victorious 200 medley and 400 freestyle relay teams while finishing second individually in the 100 backstroke and fifth in the 100 butterfly.

At the Floyd Central Sectional, he once again was a member of triumphant relay teams in the 200 medley and 400 free while also capturing the 100 back — his first individual sectional title.

“It was pretty cool, it felt pretty good to finally win after trying the past two years,” said Lawver, who also finished fifth in the 100 butterfly.

A week later at the IHSAA State Finals, Lawver finished 27th in the 100 backstroke and helped the Highlanders’ 200 medley relay team to a 13th-place finish and the 400 free relay team to 14th-place.

“The state meet’s always a tough one for us, but we went there and we broke the 400 free school record, which was pretty cool,” Lawver said. “It was a group effort and everyone did really well. So that was pretty cool.

“In my backstroke at state I added time, so I didn’t get to come back on Saturday, which was kind of disappointing. Hopefully this year I’ll just better prepare myself for state.”

That, though, is just one of Lawver’s goals for his senior season.

“My junior year was pretty good,” he said. “I had a goal to try and break the school record [in the backstroke]. I didn’t meet that goal, but there’s always next year. I’m kind of excited to see what we’ve got and it’ll be cool to be a senior, the top dogs. Then it’ll be cool to be with all my friends again as a senior and coming back for another year and hopefully we’ll win sectionals and conference again.”

NTSPY FINALISTS: Looking at all the finalists in each category