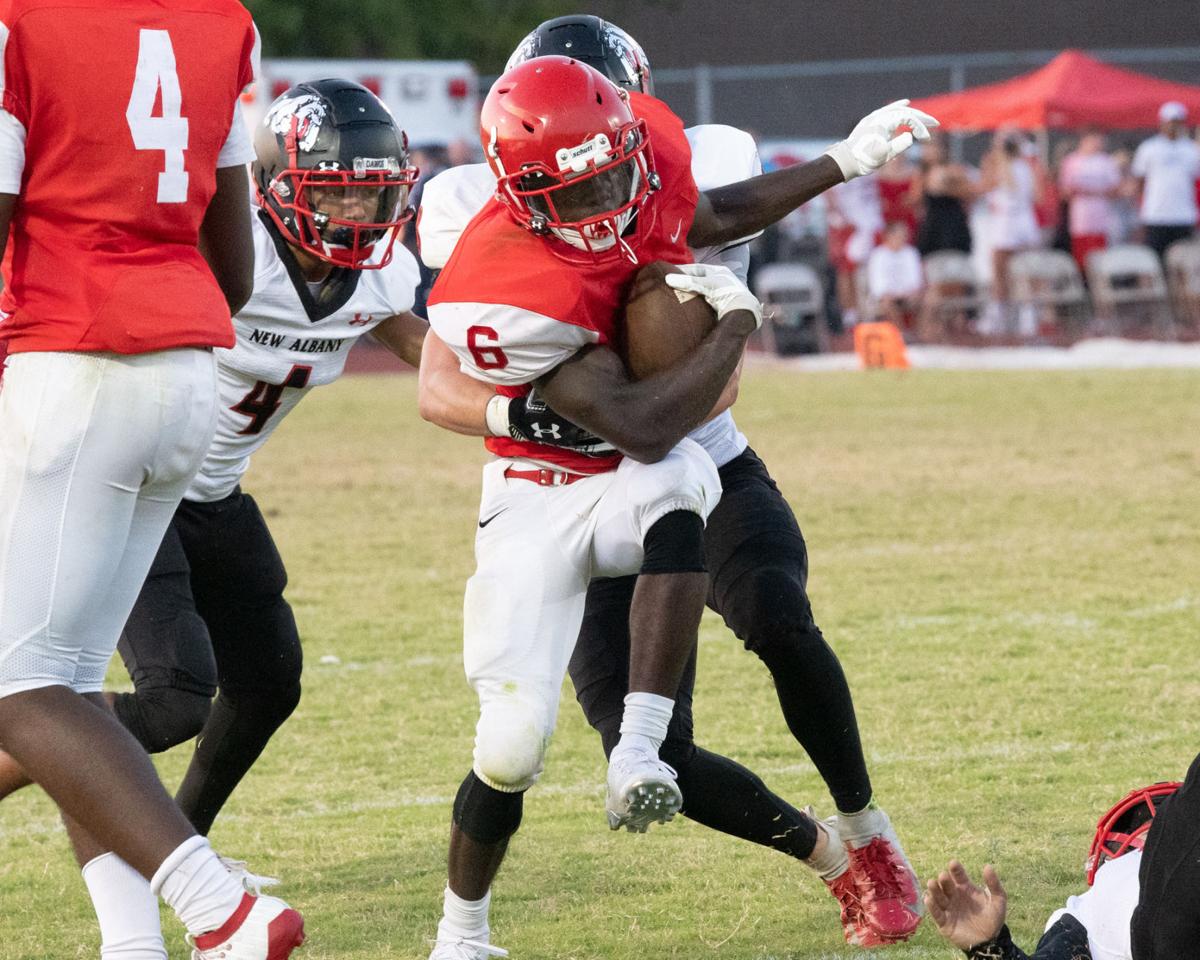 Jeffersonville's Jordan Ferguson drives for extra yards during the Red Devils' 32-13 victory over New Albany at Blair Field on Friday. 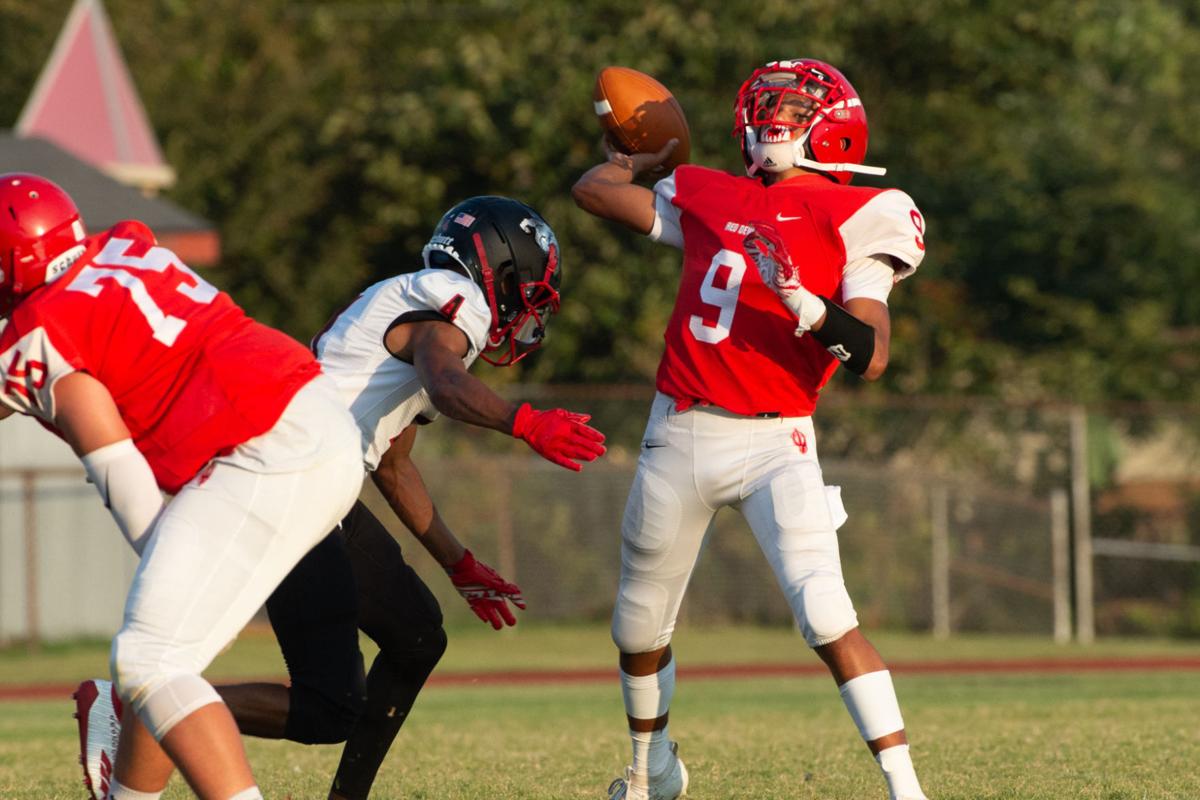 Jeffersonville quarterback Gervasio Mitchell throws down field during the Red Devils' 32-13 victory over New Albany at Blair Field on Friday.

Jeffersonville's Jordan Ferguson drives for extra yards during the Red Devils' 32-13 victory over New Albany at Blair Field on Friday.

Jeffersonville quarterback Gervasio Mitchell throws down field during the Red Devils' 32-13 victory over New Albany at Blair Field on Friday.

Friday night was a big one for Jeffersonville and first-year head coach Isaac Parker.

The Red Devils picked up their first win of the season, as well as the first one for Parker. They also ended a three-game losing streak to archrival New Albany with a 32-13 triumph at Blair Field.

In addition to those breakthroughs, there were several other newsworthy, and noteworthy, things that happened for the Red Devils.

*Gervasio Mitchell got the start at quarterback in place of senior Shaun Wimberly Jr., who was sidelined with a hamstring injury, and performed admirably. The 5-foot-10 junior completed 4 of 11 passes for 56 yards, nearly ran for a TD, and played turnover-free while engineering an offense that gained almost 400 yards.

Mitchell’s biggest play was a fourth-down completion to Jaylen Bell-Mansfield late in the second quarter that set up the game’s first touchdown — a 1-yard dive by Isaac Findley.

“I don’t think Gervasio had started a [varsity] high school football game,” Parker said of Mitchell, who caught a 74-yard TD pass from Wimberly in Week 2. “His attitude was there. … We’re really pleased with the effort tonight by G. The kid’s a winner.”

It may not be Mitchell’s only start. After the game Parker said he was unsure about the timetable for Wimberly’s return.

*Jeff junior running back Jordan Ferguson carried the ball 16 times for 176 yards and a TD against the Bulldogs. Not too bad for someone who barely touched the ball in the Red Devils’ first two games.

“We planned on having Ferguson in Week 1, and we just felt like he wasn’t hitting the hole quite as hard as we needed him to,” Parker said. “[But] he stepped up last week. He went up to Seymour and played on Saturday [in the JV game] and had a phenomenal Saturday. Our starting ‘A’ backs weren’t there today from Weeks 1 and 2 and he stepped up today. He filled a role and he got our attention a little bit. He played good football.”

*Jeff senior linebacker Ethan Rogers played one of the best games of his career, and he did it with a heavy heart after the death of his grandmother.

Rogers had two interceptions, including one he returned for a touchdown in the third quarter.

Rogers picked off one New Albany pass, off a Devaca Parks deflection, in the first half. Then in the third quarter, shortly after Findley’s second TD run put the Red Devils up 13-0, Rogers tipped Derell Simmons’ pass, plucked it out of the air and the former running back ran down the sideline for a touchdown that really turned the tide in favor of the Devils.

“He looked great,” Parker said. “He played ‘A’ back, tailback, for us last year. He looked like it again tonight. I think maybe we found two running backs tonight.”

Here’s a quick look ahead at Friday night’s games.

Charlestown (1-2, 1-2) at North Harrison (2-1, 2-1): The Marion Lukes train got rolling Friday night against Clarksville, can you hear that train a comin’ in Ramsey?

Providence (1-2) at Clarksville (1-2): The Pioneers attempt to bounce back from consecutive losses, while the Generals try for their first win over Providence since 2012.

Crawford County (0-3) at Rock Creek (1-2): The Lions look to rebound from their loss at Lexington (Ky.) Sayre against the winless Wolfpack, who have been outscored 162-18 through three weeks.

Bettie Jean Shepherd, 90 years of age passed away on February 27, 2020 at the Episcopal Church Home in Louisville. She was born on May 5, 1929 in New Albany to the late Ralph Waldo and Ester I. Gresham. Bettie was an avid Bridge player at both Hunting Creek and Lake Forest County Clubs, a Fi…

Do you hold your cell phone and talk while driving your vehicle?

With the Indiana General Assembly seemingly poised to make it illegal for motorists to hold or use a cell phone while driving their cars and trucks, except in the case of an emergency to call 911, we were just curious how much of that still occurs in Southern Indiana. Many newer vehicles have built-in Bluetooth wireless technology, and portable Bluetooth devices in various shapes are readily available.