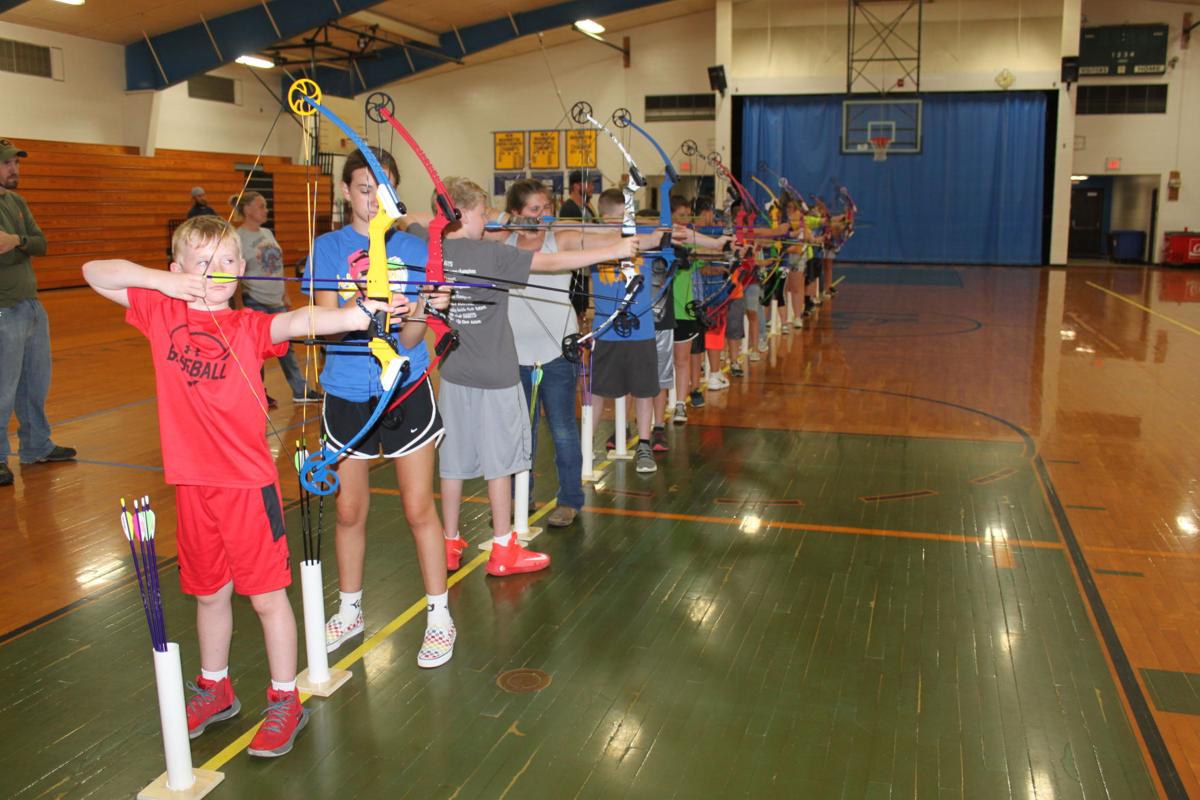 Bo Cole (left), Kaylee Lawrence (second from left) and the rest of the New Washington elementary archery team practice earlier this month in the school gym. | PHOTO BY SHELLI SPAINHOUR 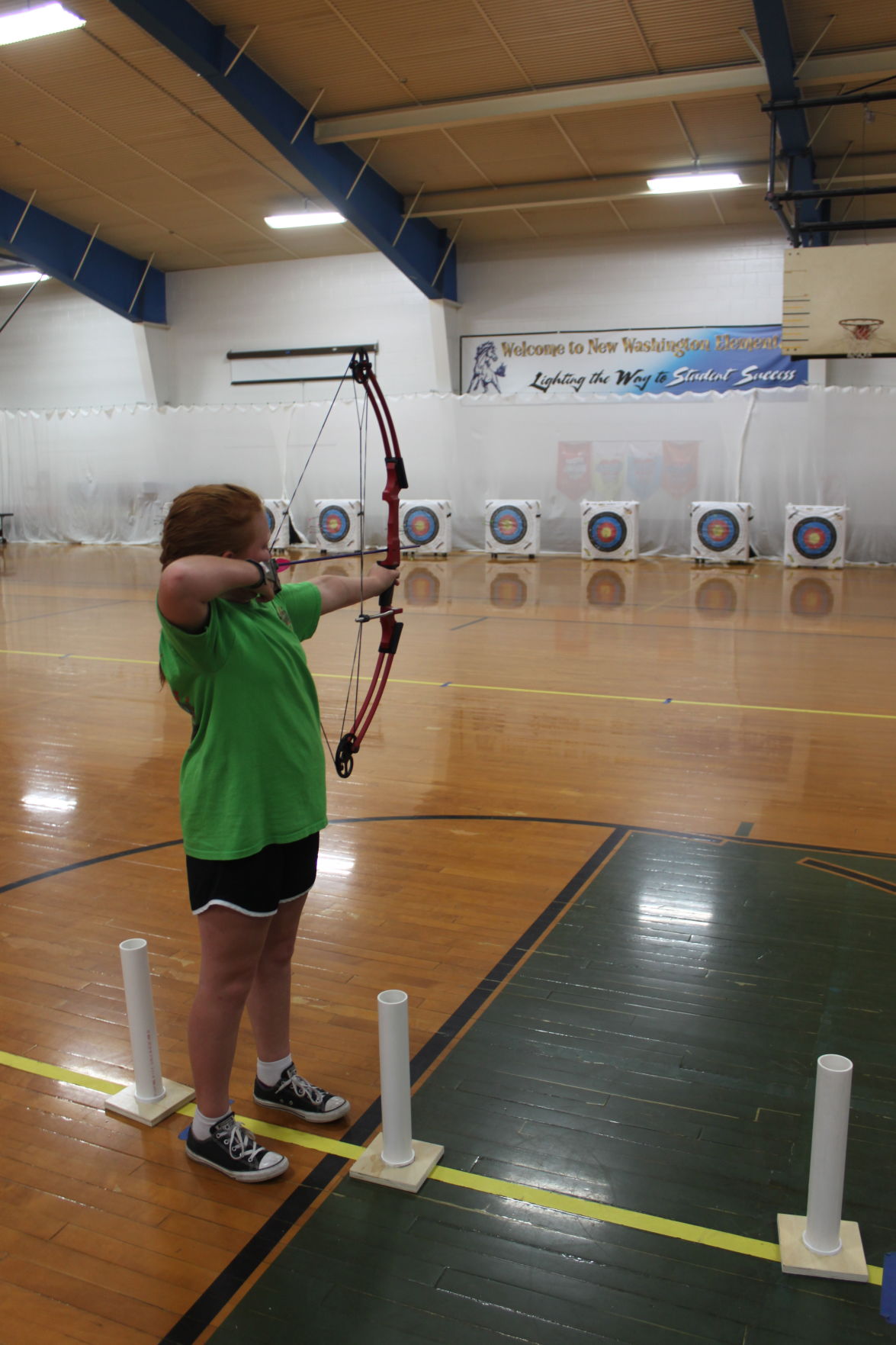 New Washington’s Jasmine Westbury practices earlier this month prior to the world championships.

Bo Cole (left), Kaylee Lawrence (second from left) and the rest of the New Washington elementary archery team practice earlier this month in the school gym. | PHOTO BY SHELLI SPAINHOUR

New Washington’s Jasmine Westbury practices earlier this month prior to the world championships.

We have been blessed with many successful teams in Clark and Floyd counties. From Little League to high school, we have had very talented and successful individuals on these teams. Not every kid is a Romeo Langford from New Albany, or Drew Ellis from Jeffersonville playing in the pros and that's OK.

Every young person can't run fast, jump high or hit a 95 mph fastball, but that doesn't mean they can't be part of a team. Sometimes all it takes is the encouragement of a parent or teacher. This is where Doug and Peggy Cole, along with Donita Bower, of New Washington stepped up to the plate. They approached Darcie Goodin, New Washington's elementary principal, about starting an archery team.

With her blessing, the New Washington fourth and fifth grades started an archery team. In October, they joined a growing population of archers who participate in National Archery in the Schools Program (NASP). Tragically, in November, Doug Cole passed away. Not to let his dream pass with him, Peggy was driven to make this a success.

Peggy and Bower recruited Jody Sexton, Wyatt Rivers and Heather Barry to help coach the 67 kids who signed up. I want to add, none of these additional coaches have a child participating on the team. They do it for the love of the sport and the kids. Peggy is the only coach who has a child on the team, and his name is Bo. Of the original 67 that initially signed up, 40 stuck with it and of those, the highest scorers went to the world competition.

The coaches and kids have put in many hours practicing. From October to February, the team traveled locally to tournaments and even hosted a few. With hard work and dedication came great results. Twenty-four of the original 40 qualified for the Indiana State NASP Tournament in Indianapolis in February. The team was ranked 13th out of 25. With that ranking, New Washington qualified for the national tournament held in Louisville in May. At nationals, the team was ranked 89th out of 200. That finish earned a bid to the world tournament in Nashville last weekend.

The team placed 19th out of 34. For a first-year team to finish that well in a world tournament sets the bar extremely high, especially when you consider the fact that prior to October 2018, New Washington Elementary didn't even have a team. In nine short months a team was assembled, received enough donations to purchase bows, arrows, targets and pay the tournament entry fees, plus travel expenses.

"Twelve of our 24 archers had their personal-best at worlds," Bower said.

"Kids are discovering a brand new activity, an activity that doesn't discriminate based on popularity, athletic skill, gender, size or academic ability. It's a different kind of team sport. It's open to any student. The aim of NASP is to improve educational performance among students in grades 4 through 12. Through NASP students are learning focus, self control, discipline, patience and the life lessons required to be successful in the classroom and in life."

To start a NASP program in your school takes time and effort. All the instructors must be trained and certified by master instructors of NASP. To make competition fair, all equipment is the same. Only Genesis Original bows can be used along with Easton 1820 arrows. All the tournaments are run exactly the same way with a strict emphasis on safety. As with any non-school sponsored team, the money to run it is solely from donations. The town of New Washington isn't big in numbers, but definitely big in heart.

The team is currently seeking donations to purchase more bows, targets and specialized equipment. If you'd like to donate to the team, please contact Peggy Cole or Donita Bower through New Washington Elementary school.

Mac Spainhour can be reached via email at sspainhour@twc.com.