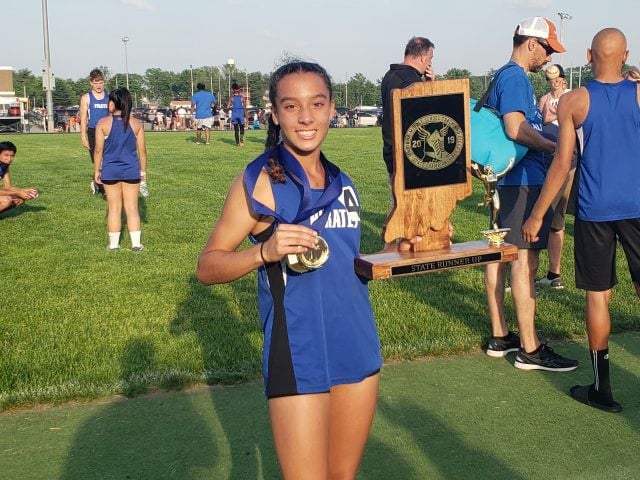 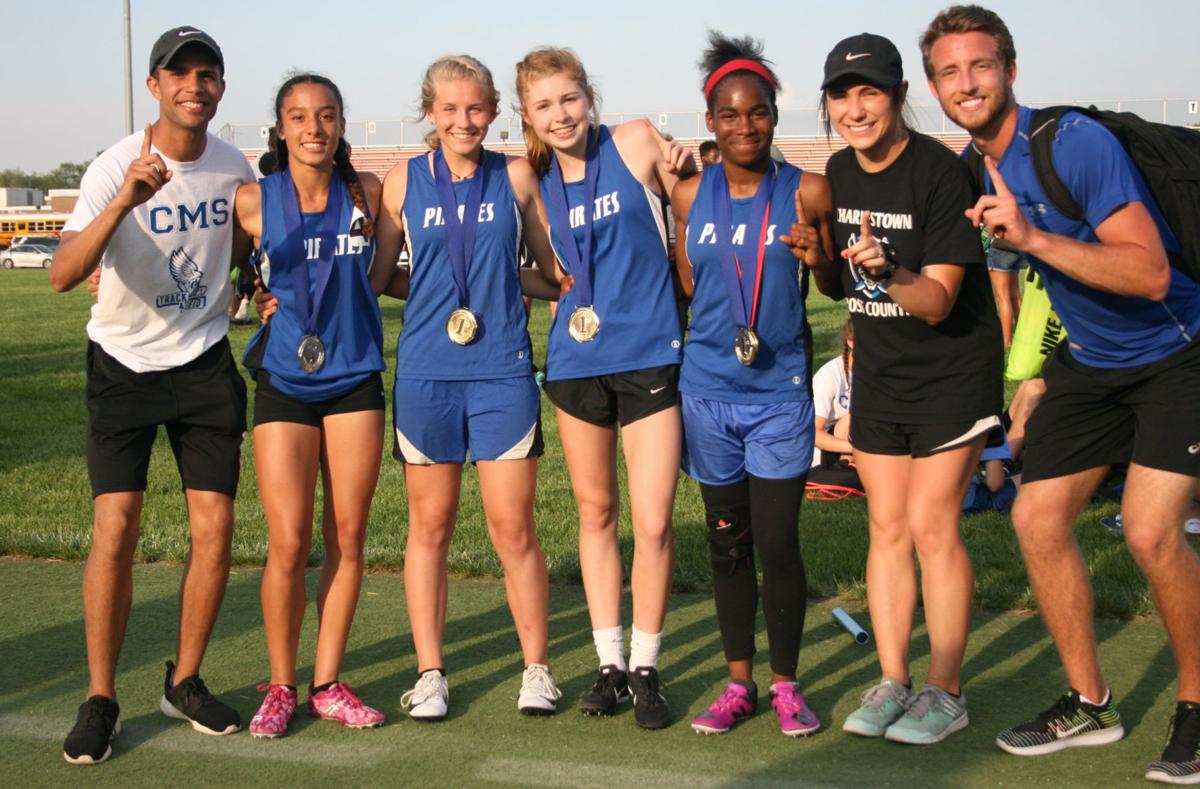 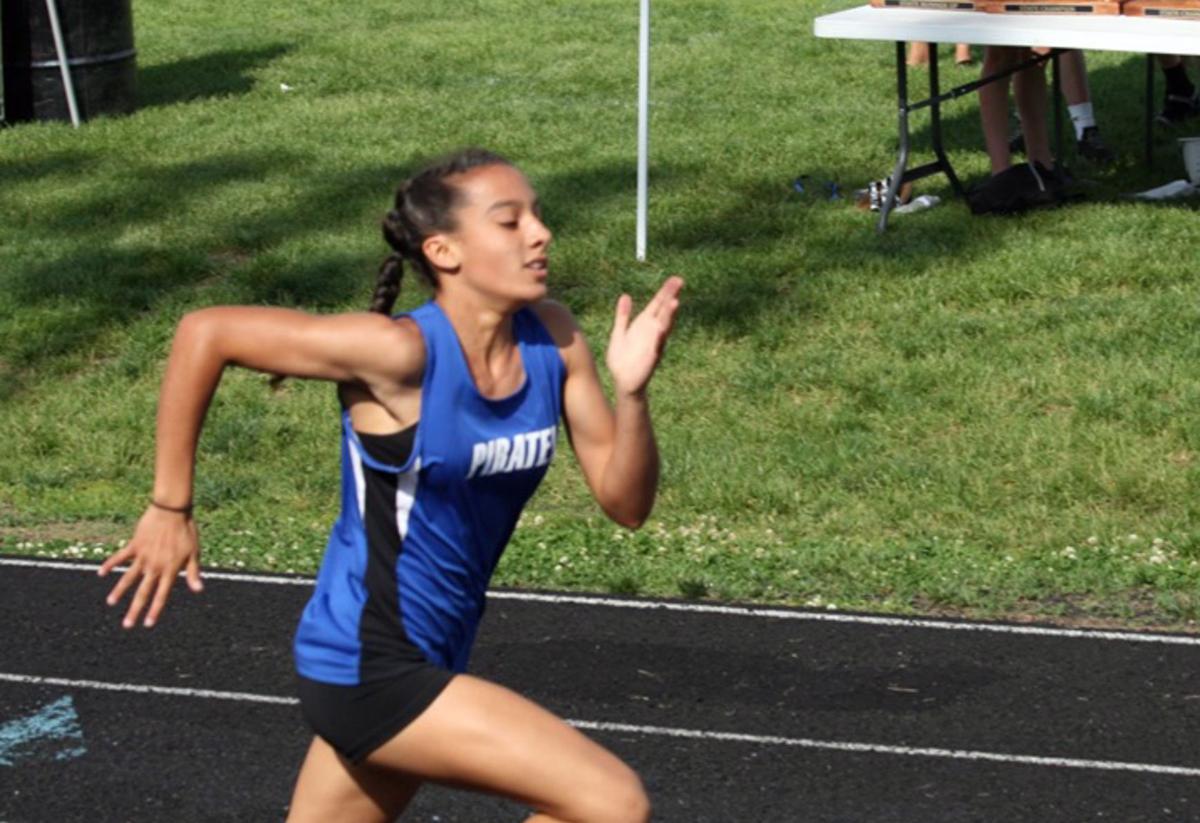 CHARLESTOWN — The Charlestown High School girls basketball and girls track teams have multiple prospects who will be looking to make some noise for the Pirates in a couple years.

Charlestown took state runner-up honors at the Indiana Middle School Track & Field State Championships as Lyric Steele won the state title in the 200-meter dash in 26.06 seconds, while the Pirates also won the 1,600 relay on May 18 at Terre Haute South High School. The Pirates 1,600 relay squad of Steele, Lienna Blackstone, Laney Hawkins and Talia Bikai won by four seconds with a time of 4:16.58. All four played a role in the team achievement and thrower Alexis Deaton took third in the shot put and seventh in the discus.

But Steele, who qualified in the 100-meter dash as well but scratched to focus on the 200, stands out among her peers.

Steele's best 200 time of 25.95 that won the Clark/Floyd County Championships ranks among the top 10 seventh-grade times in the nation, according to athletic.net. That time, which set the state middle school meet record, would have tied New Albany senior Mariah Grant for 23rd at the IHSAA state meet this June in Bloomington.

Her best 100 time of 12.74, run prior to her recent 13th birthday, would have put her third in the Jeffersonville Sectional behind only state finalists Aaleiah Winford and Ligia Williams.

Not bad, especially considering Steele didn't step foot on a track until her sixth grade school year. When visiting basketball gyms, she's checking out the school-record sprinter times that are posted to see how she stacks up.

"I had a feeling but I didn't have the best feeling about it," Lyric said of getting started in track. "It was kind of my mom made me do it at that time. I have [grown to love it]. It's been one of my favorite sports. Basketball's my No. 1."

The 13-year-old's speed was on display on the soccer field and the basketball court — she helped Charlestown win the Clark/Floyd County basketball title — and her mother Alanna Steele happens to be a former sprinter and heptathlete at the University of Louisville. She's got genetics on her side on her paternal side as well. B.J. Steele was a standout football player at Charlestown before going on to play at U of L.

"I feel like she'll get better as she goes. She's so small right now. She's short and I think she'll get a lot better as the years go on because of her genetic background and the way she's built right now," Charlestown middle school coach Solomon Bennett said. "It's been great to work with her. She's very mature for her age. I can see her going really far in any sport that she does. She's a good basketball player, too."

Steele and her basketball teammates played against junior varsity competition this summer and posted a 10-3 record.

Alanna said she and B.J. — some would say wisely — chose not to push track on her.

"I personally think track is a hard thing to push on kids. Running is every other sport's punishment. You don't find kids who want to go out and run 5 100-meter dashes with a minute rest between," Alanna Steele said, adding that their daughter is getting the itch to push herself to get faster.

Assistant track coach Alysha Flaget has been putting in a lot of time with her. Steele's improvement from sixth to seventh grade was impressive.

"She also goes to agility during the off-season. She sees an agility trainer. They do a lot of work there. She really works hard on the track. They always have her running with the boys. She just works hard and never slacks off," Flaget said.