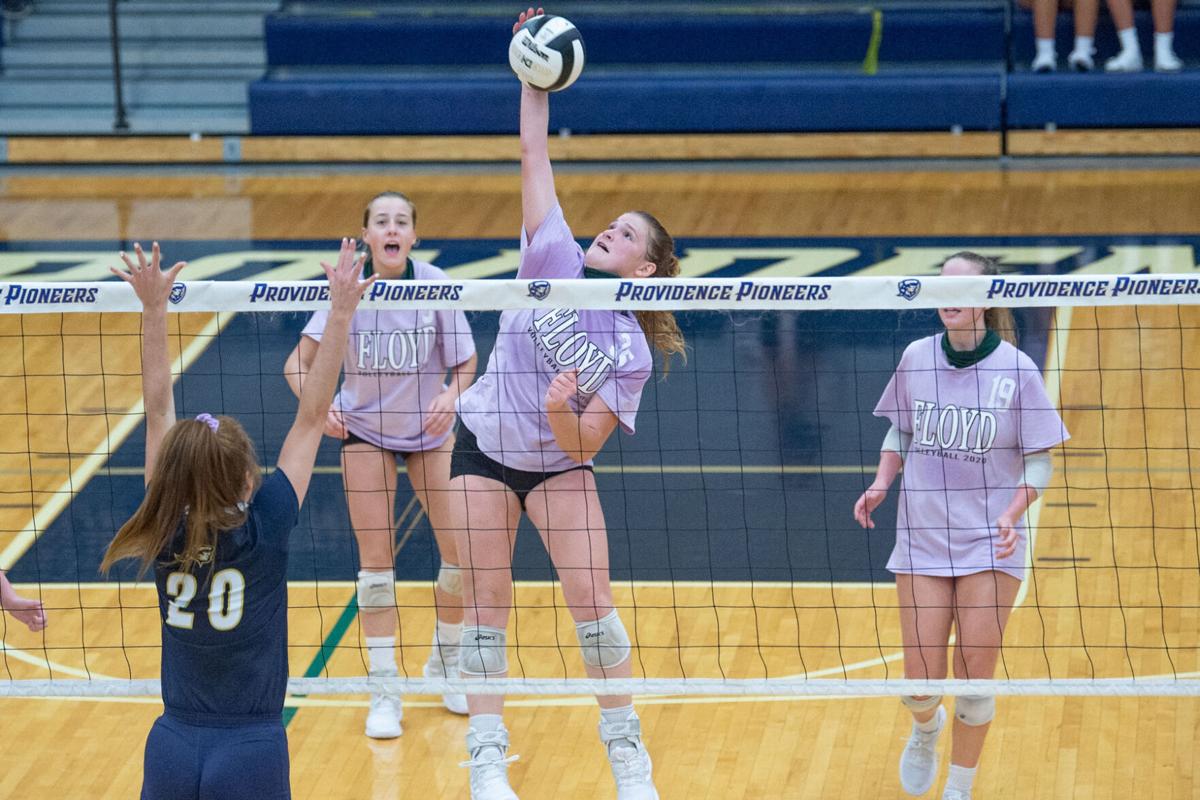 Floyd Central senior Kayden Holcomb goes up for a spike in a match at Providence earlier this season. Holcomb leads the Highlanders in kills (211), kills per set (2.3) and total blocks (62) heading into the postseason. 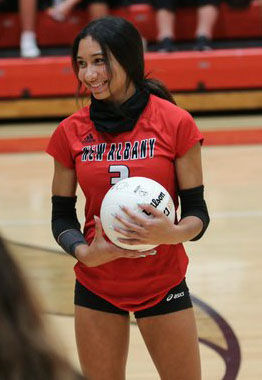 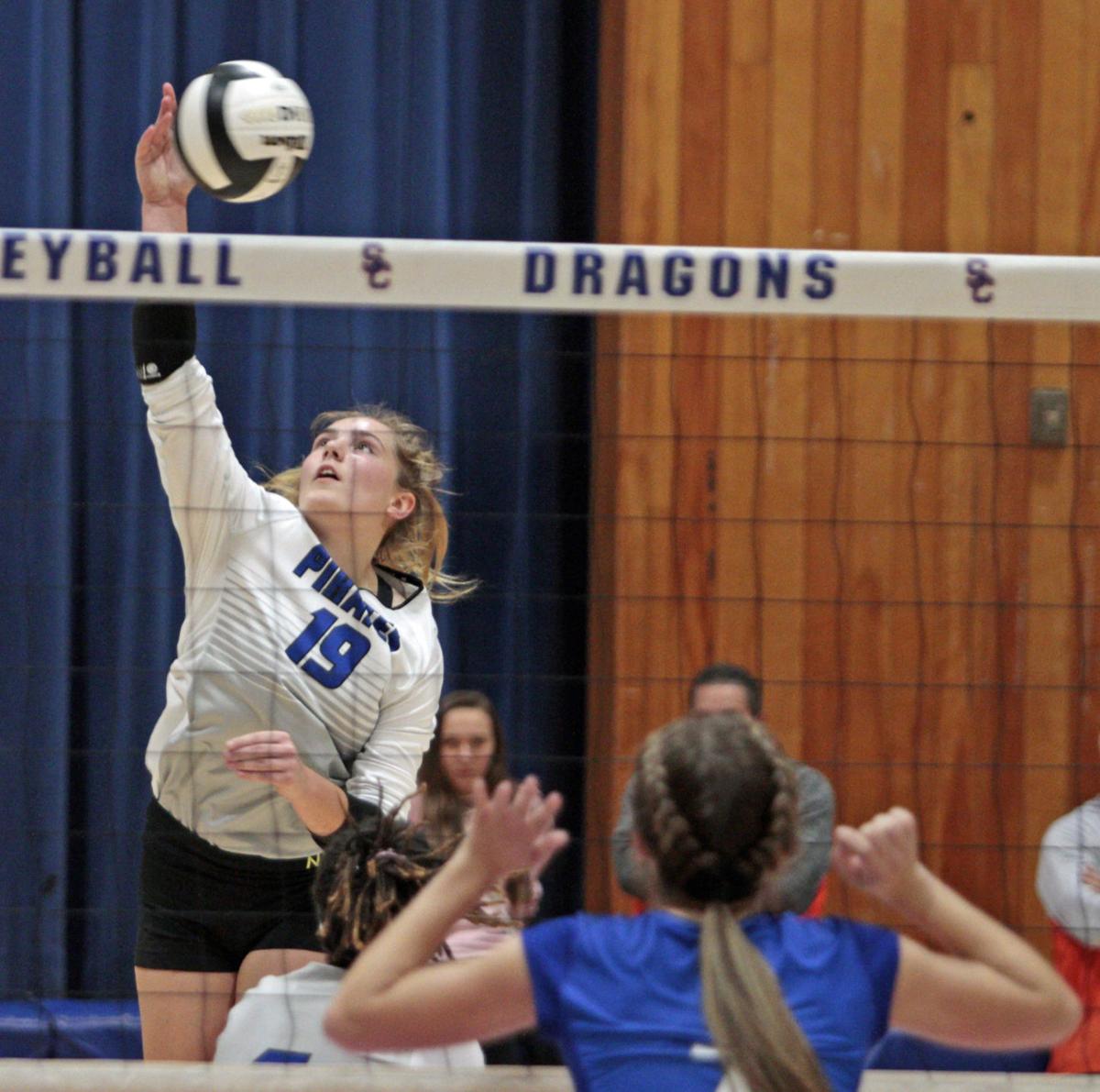 Charlestown Kayleigh Smith goes up for a spike in last year’s Class 3A Silver Creek Sectional. The senior paces the Pirates in kills (218), kills per set (3.0), kill percentage (42.1) and hitting percentage (.272) heading into the postseason. 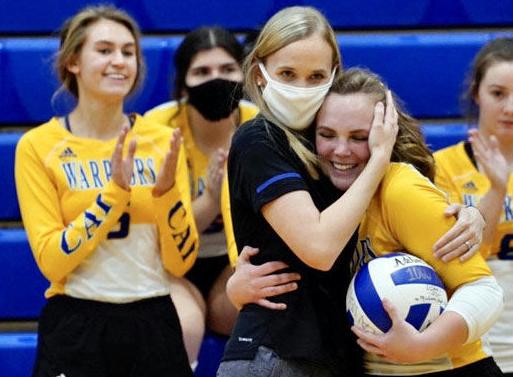 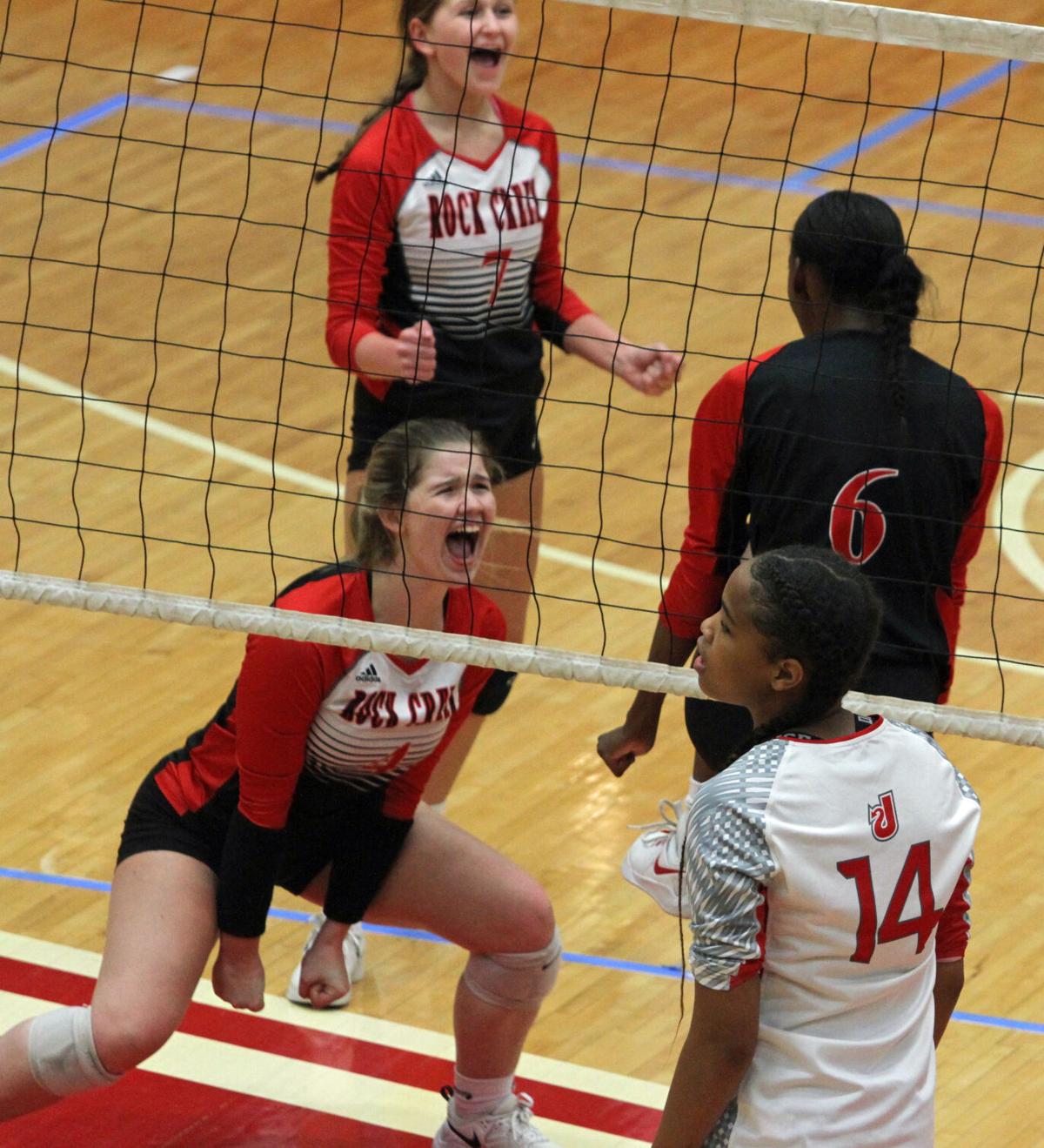 Rock Creek’s Leah Thompson (4), left, reacts after the Lions win a point earlier this season in a match at Jeffersonville. Thompson leads Creek in assists (389), aces (43) and digs (187) entering the postseason. 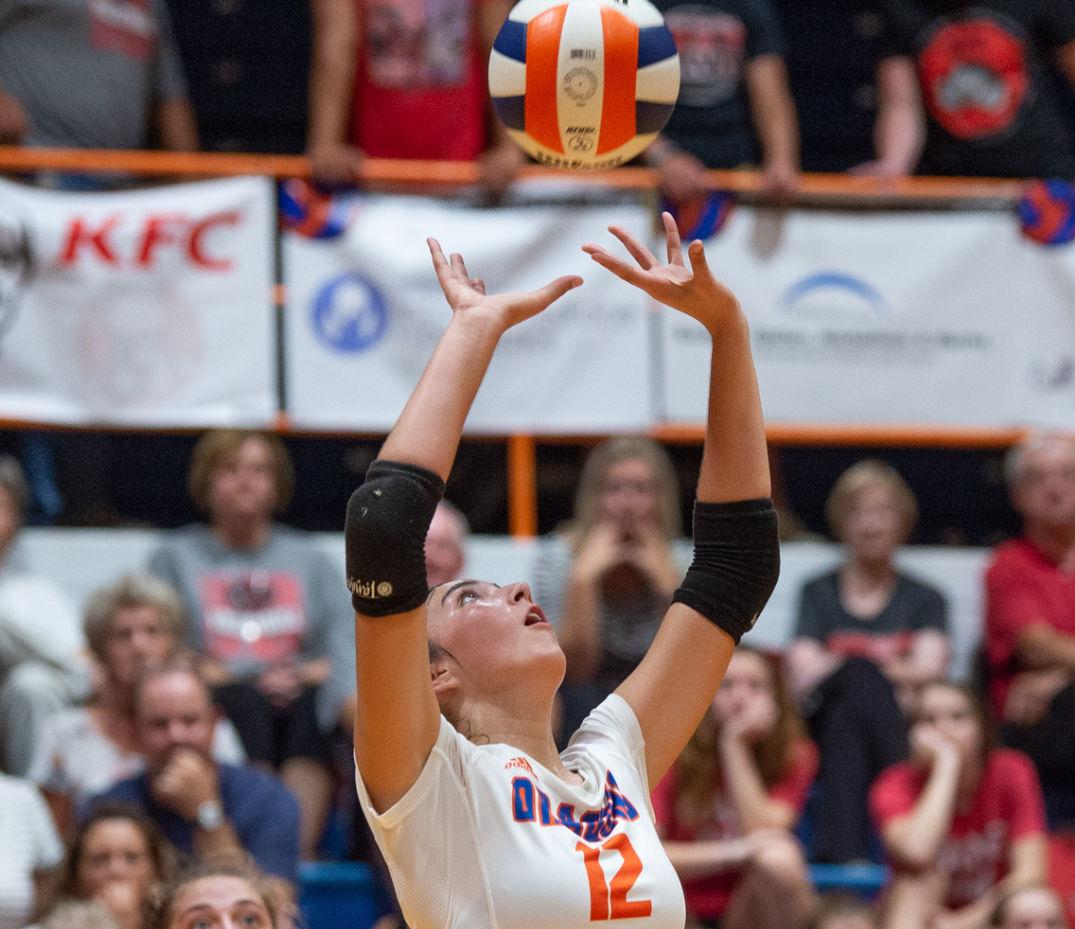 Locally, the volleyball regular season was filled with milestones, team and individual accomplishments, and even a birth.

What will the postseason bring?

At the Class 3A Silver Creek Sectional, Madison faces Salem in the first first-round match before the host Dragons (22-8) take on Charlestown (13-13) around 7 p.m. The winners will face off in Saturday morning’s first semifinal. The second semi will pit the winners of Thursday night’s Christian Academy vs. North Harrison and Corydon Central vs. Scottsburg matches. Jeff Zimmerman’s Creek team is seeking its fourth straight sectional title.

In the Class 2A Mitchell Sectional, the host Bluejackets (20-6) face Clarksville (1-13) at 7 p.m. tonight in the only first-round match there. The winner will face Paoli in Saturday’s first semifinal. The second semi will pit the winners of Thursday night’s Eastern vs. Henryville and Crawford County vs. Austin matches. The Hornets (23-5) are the defending champs.

In the Class 4A Jennings County Sectional, New Albany (19-10) takes on Seymour (15-15) in the first match while the host Panthers (4-12) face Floyd Central (19-12) in the second. Bulldogs coach Ryan Woosley and his wife, Alli, welcomed their first child Aug. 30, one day after his team swept Lanesville and two days before being swept by Providence.

“Not a good night, but going home to that I can’t be mad,” Woosley said following the latter.

If Woosley and the ‘Dogs beat the Owls they’ll get a rematch against the Pioneers (19-6) at 11 a.m. Saturday in the first semi. Meanwhile the Jennings-Floyd winner will meet Jeffersonville (9-18) in Saturday’s second semi. Long-time coach Terri Purichia, who notched her 600th career victory earlier this season, and her Pioneers will be trying for their 10th straight sectional title.

In the Class A Rock Creek Sectional, the host Lions (20-9) face Borden (2-17) at 6 p.m. Thursday in a first-round match while Lanesville and Shawe Memorial meet in another. The winner between Creek and the Braves will take on New Washington at 10 a.m. Saturday morning in the first semifinal. South Central awaits the winner between the Eagles and Hilltoppers in the second semi. The Lions are seeking their fourth consecutive sectional title.

The complete schedules for all four sectionals involving local teams are below, underneath a quick look at 20 players to watch in the postseason.

The sophomore outside hitter/defensive specialist ranks among the Highlander leaders in several different categories. She tops the team in serves received (387) and ranks second in kills (190), kills per set (2.1) and digs (276). Hilbrich, who is fourth in aces (37), also has a 39 kill percentage and a .285 hitting percentage.

The senior outside hitter tops the Dragons in kills (299) and kills per set (3.6) while posting a 44.5 kill percentage and a .304 hitting percentage. She’s also second on the squad in aces (36) and total blocks (34) while ranking fourth in digs (141) and serves received (109). She recently topped 1,000 kills for her career and is second, behind Haley Garr, in program history.

The senior setter/defensive specialist is among the leaders in a number of categories for the Pioneers (19-6). The Indiana State commit is second on the squad in assists (331) while ranking third in aces (31), total blocks (27) and digs (162). Additionally, she’s fourth in kills (112).

The senior defensive specialist tops the ‘Dogs in several categories, including aces (55), digs (344) and serves received (463). Earlier this season she surpassed the program-record for career digs (1,020), which stood for 28 years. She enters the postseason with 1,348 digs to her credit.

The senior outside hitter ranks second on the squad in kills (241) and kills per set (3.1) while also posting a 37.3 kill percentage. Additionally, the Eastern Kentucky commit is fourth in total blocks (22) and fifth in service aces (21) and serves received (121).

The sophomore setter/hitter paces the Pioneers in assists (438) and service aces (38) while also ranking second in digs (189) and third in kills (117).

The senior outside hitter/middle blocker paces the Pirates in kills (218), kills per set (3.0), kill percentage (42.1) and hitting percentage (.272). Additionally, she is fourth in serves received (115) and is tied for fifth in total blocks (eight).

The middle blocker is having an outstanding senior season for the Lions. She tops the team in kills (346), kills per set (5.0), kill percentage (65) and total blocks (68). Additionally, the Cincinnati commit leads all four classes in hitting percentage (.498) while ranking third in Class A in kills and kills per set, according to maxpreps.com. Williams is also third on Creek in aces (30) and digs (170).

OTHERS TO KEEP AN EYE ON

All records are through Saturday matches via maxpreps.com