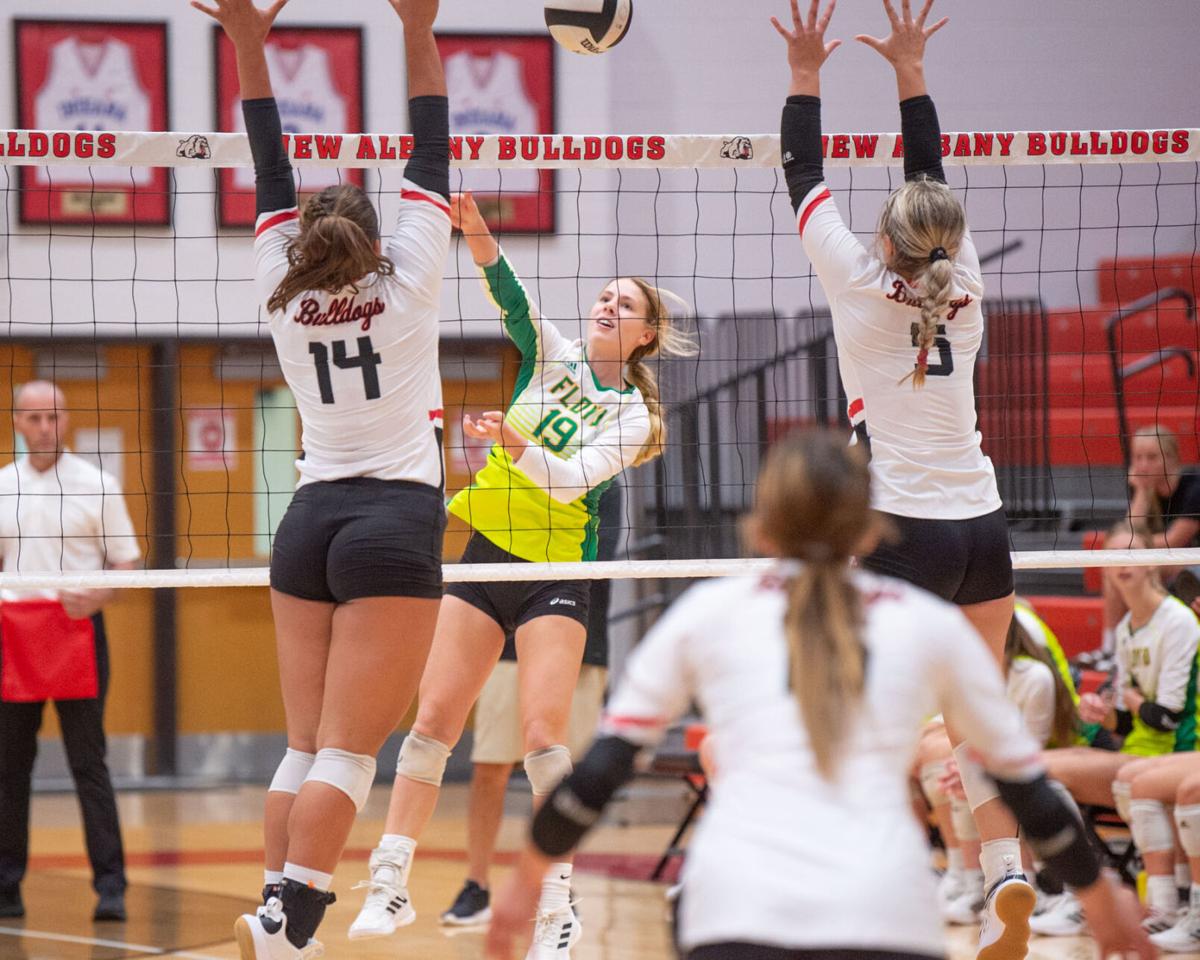 Floyd Central junior Caroline Hilbrich tries to fire a spike past a pair of New Albany defenders during the Highlanders’ victory over the Bulldogs earlier this season. The 5-foot-10 outside hitter/defensive specialist leads Floyd in kills (268). 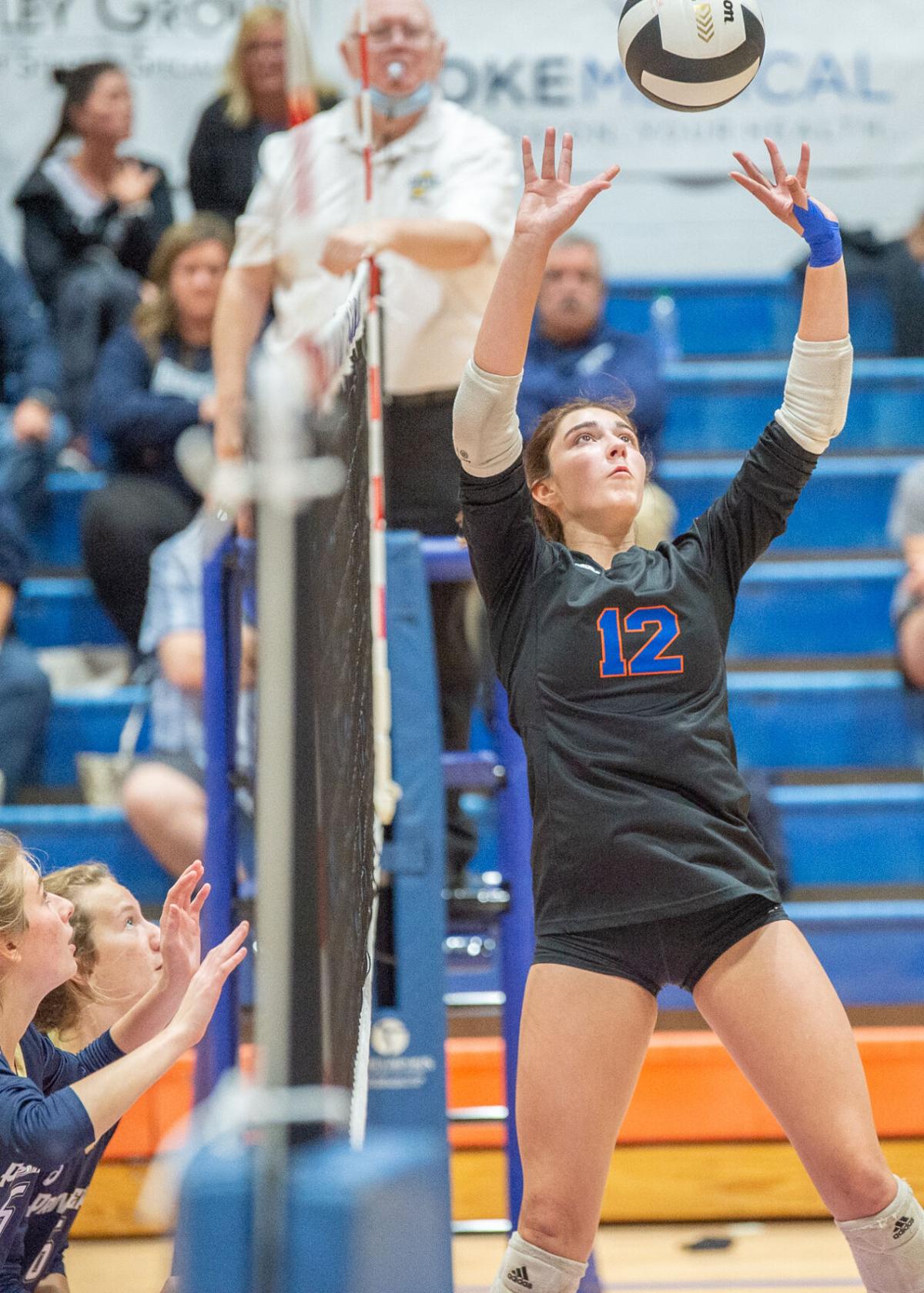 Silver Creek senior Abby Marks sets the ball at the net during the Dragons’ 3-0 loss to Providence earlier this season. She entered the postseason with 688 assists for Creek, which swept North Harrison 25-11, 25-6, 27-25 last Tuesday night in the first round of the Class 3A Scottsburg Sectional. 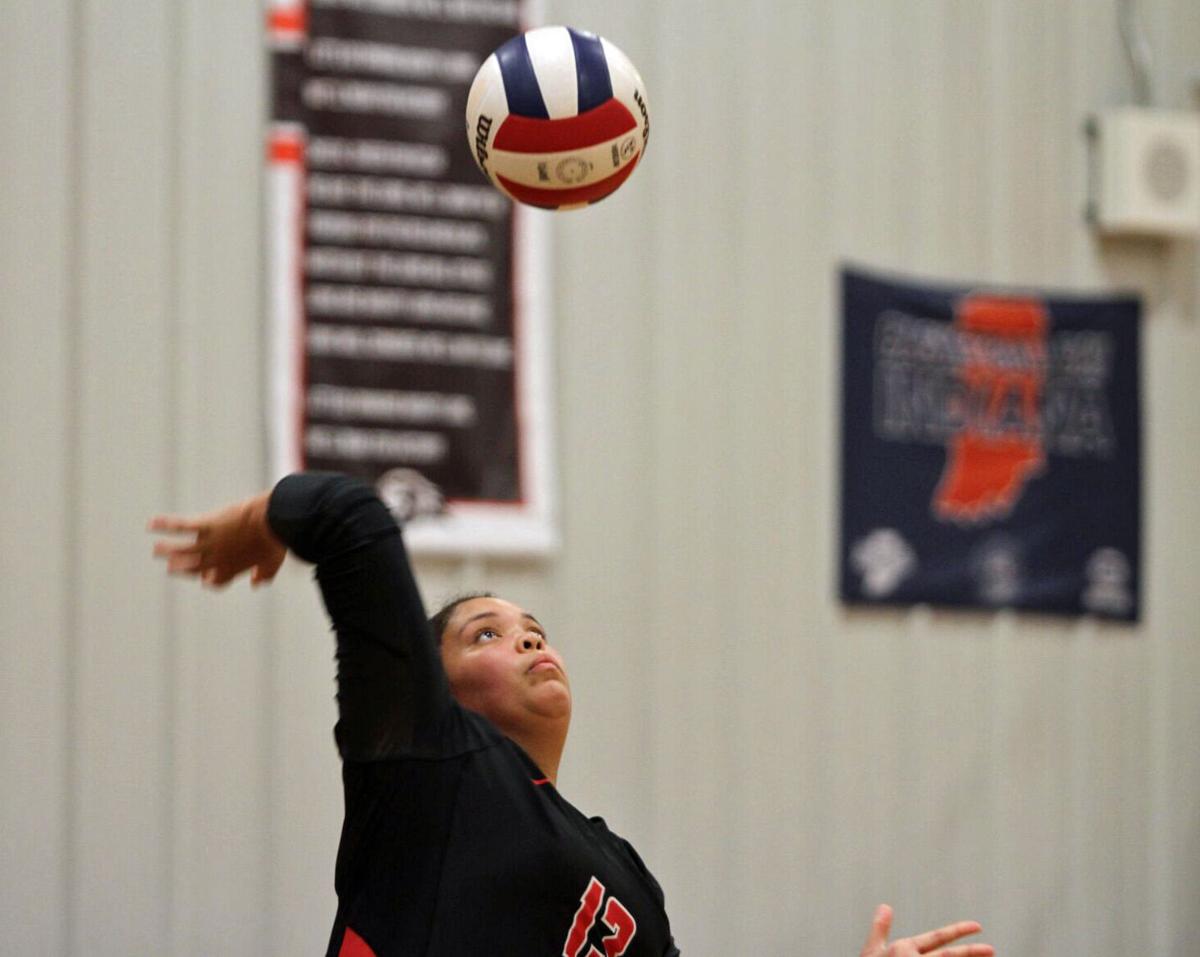 Rock Creek’s Jayli Smith goes up for a spike earlier this season. The 5-foot-10 sophomore setter/right-side hitter, an all-around contributor, will try to help lead the Lions to their fifth straight sectional title this week. 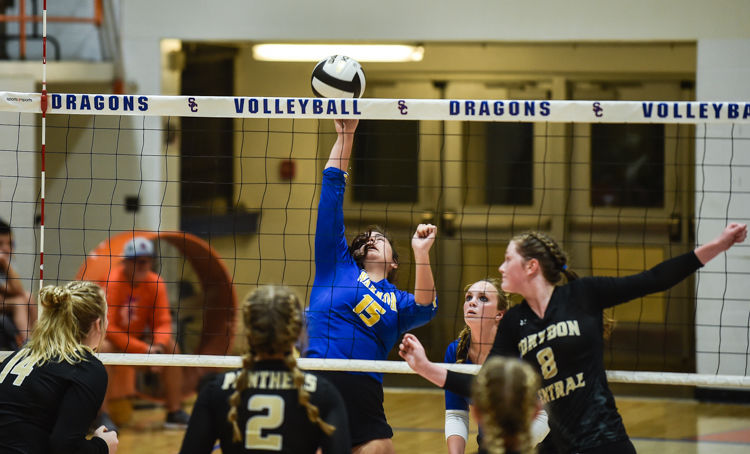 Christian Academy's Chloe Wiseheart reaches for the tipped ball by Corydon's Savannah Moberly (8) during the Warrior's first-round match in the Class 3A Silver Creek Sectional on Tuesday. 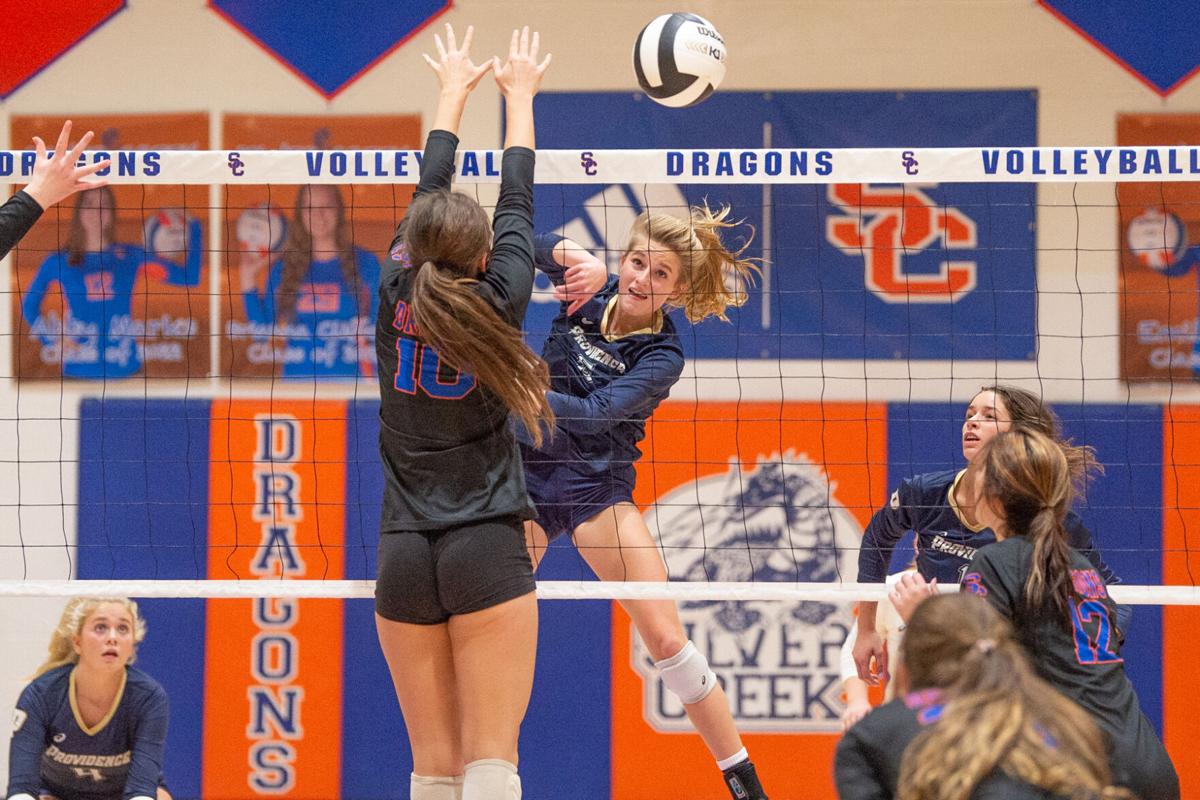 Locally, our area teams are participating at four different sites: Providence (Class 4A), Scottsburg (3A), Christian Academy (2A) and Rock Creek (A).

With that in mind, we’re going to take a quick look at 12 players to watch this week.

The 5-foot-7 junior defensive specialist entered the postseason topping the team in digs (369) and service aces (46) while ranking second in assists (94).

The 5-10 junior outside hitter/defensive specialist leads the Highlanders in kills (268). She’s also second in service aces (35) and digs (279).

The 6-0 senior middle hitter paces the Pirates in kills (237). McConnell, who became the program’s all-time leader in blocks earlier this season, ranks second on the squad in solo blocks (25), block assists (11) and total blocks (36). She’s also third in service aces (36).

The 5-8 senior setter, who was second-team All-State last year, entered the postseason with a whopping 688 assists. She also ranked second on the squad in digs (212) and fifth in aces (27) and kills (83).

The 5-7 junior setter/opposite-side hitter, who committed to Jacksonville State earlier this season, paces the Pioneers in assists (666) and digs (274). She’s also tied for second on the squad in service aces (35) and third in kills (196).

The 5-10 sophomore setter/right-side hitter, an all-around contributor, will try to help lead the Lions to their fifth straight sectional title. She had a 20-20 effort (21 assists, 20 kills) in Creek’s five-set win over New Washington during the regular season.

The 5-7 senior setter/defensive specialist stuffed the stat sheet for the Warriors during the regular season. She topped the team in assists (359) while ranking second in digs (175) and third in service aces (60).

Lowdown: The host Pioneers have won 10 consecutive sectional titles — the fifth-longest active streak in the state. Eleven in a row won't come easily, though. The Owls enter the postseason riding a 17-match win streak. Formidable Floyd looms on the other side of the bracket.

Lowdown: Silver Creek has won four straight sectional titles. A huge hurdle in the Dragons' Drive for Five will be Saturday's semifinal against the Cubs, who beat Creek in five sets on Sept. 1.

Lowdown: Henryville has won back-to-back sectional titles, however the Hornets suffered huge graduation losses. Mitchell, which lost to Henryville in four in last year's final, is the favorite to claim its first title in 15 years. The host Warriors could have something to say about that, though.

Lowdown: The host Lions have captured four consecutive sectional titles. A fifth in a row certainly isn't out of the question considering Creek beat the other five teams in the field during the regular season.