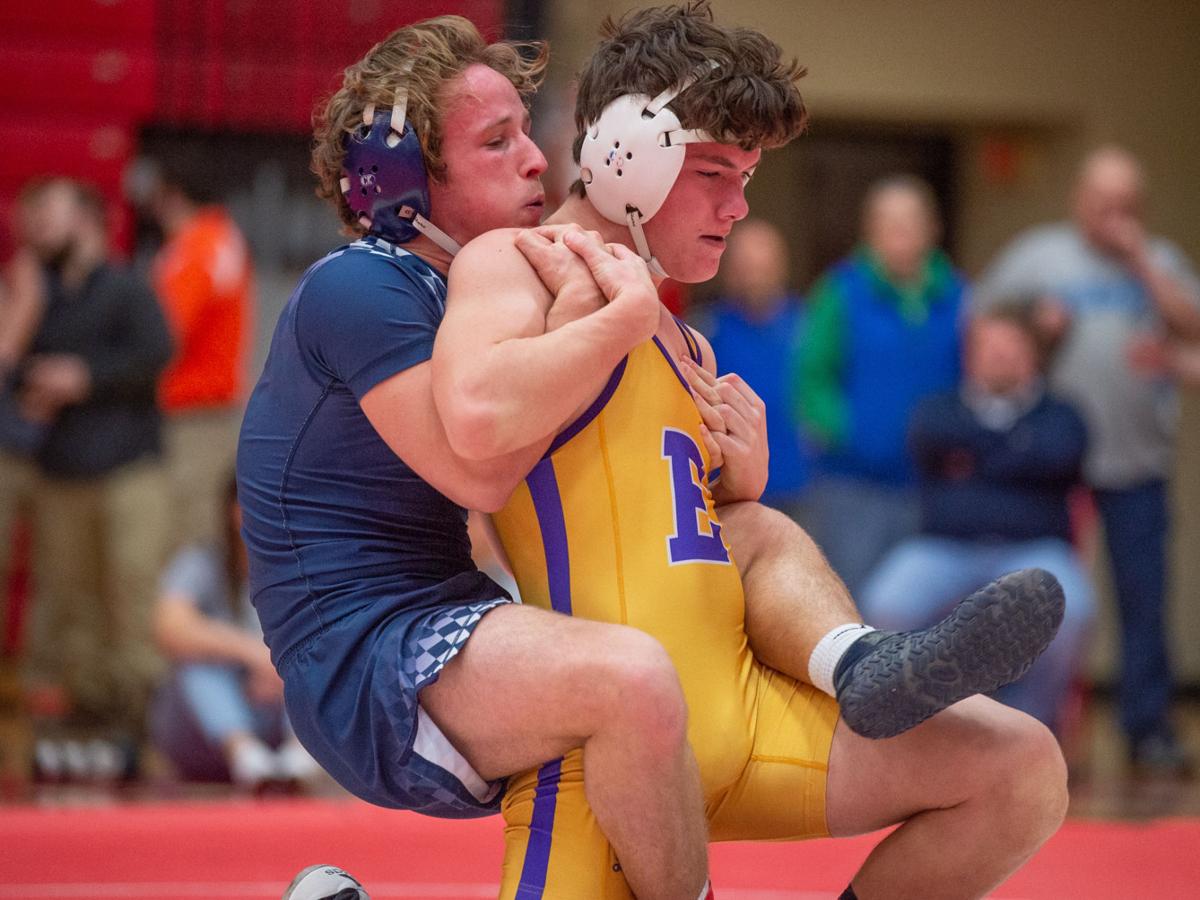 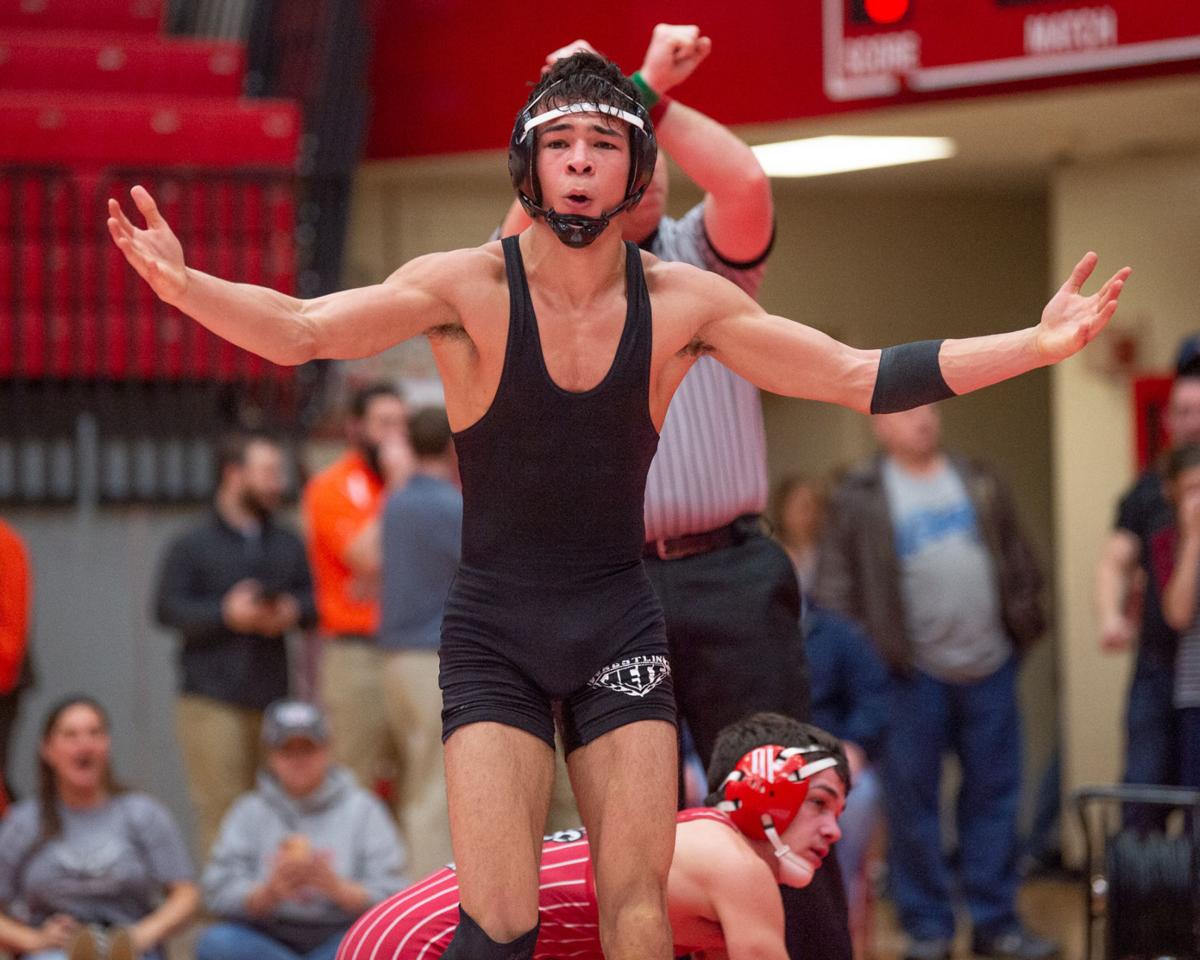 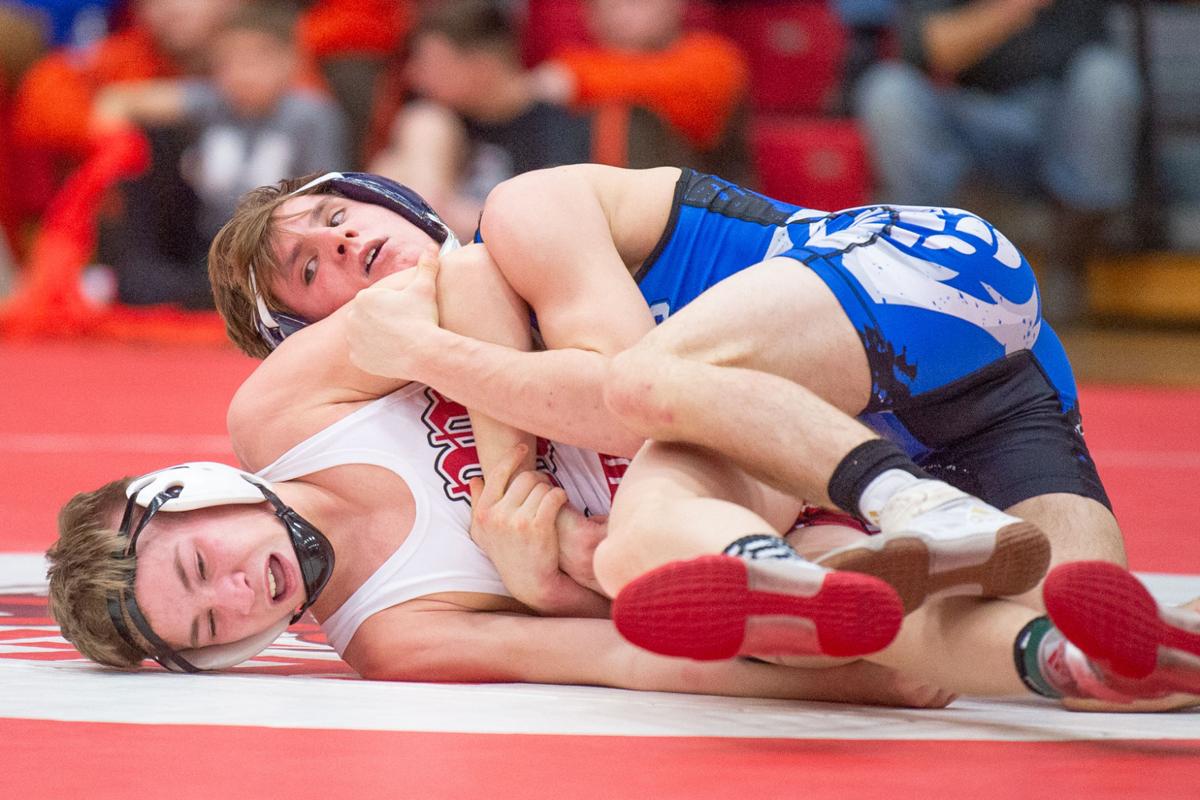 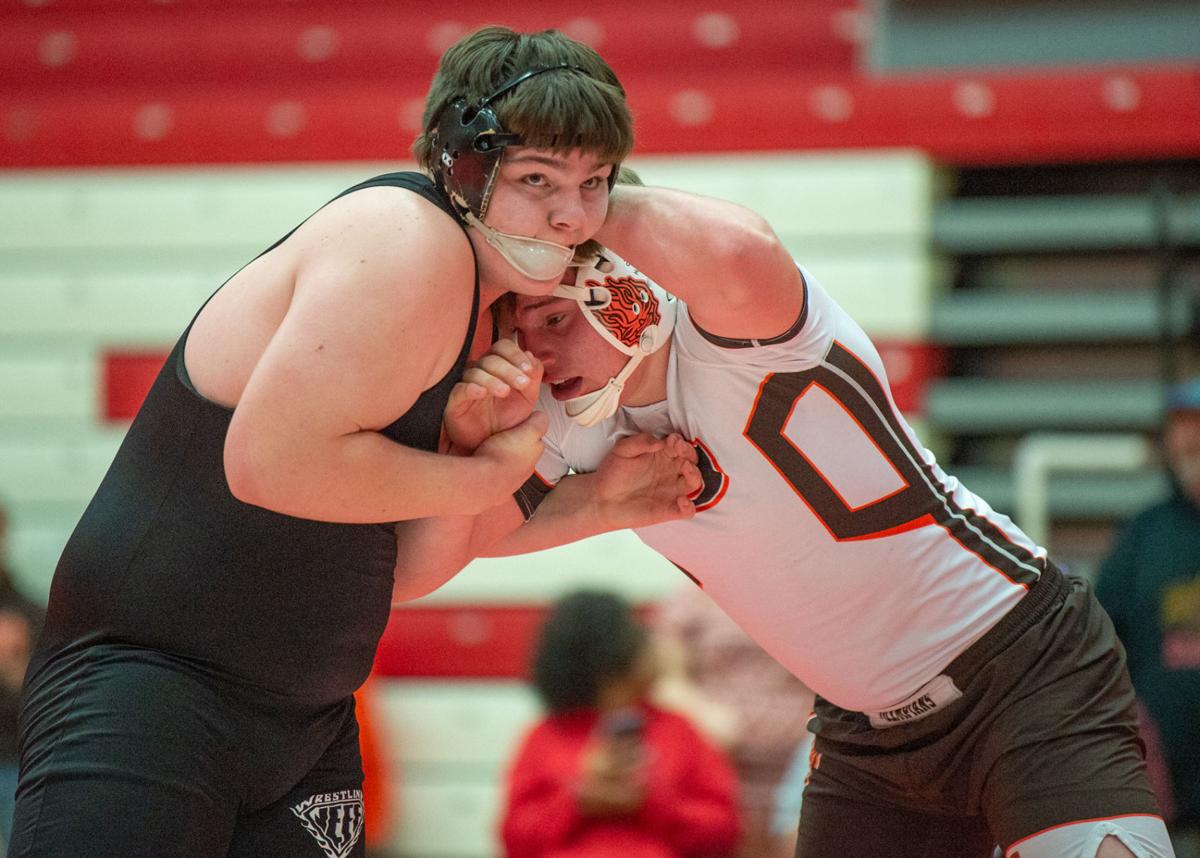 Jeffersonville’s Matthew Munoz looks to the clock in the 285-pound championship match of the Jeffersonville Regional on Saturday. 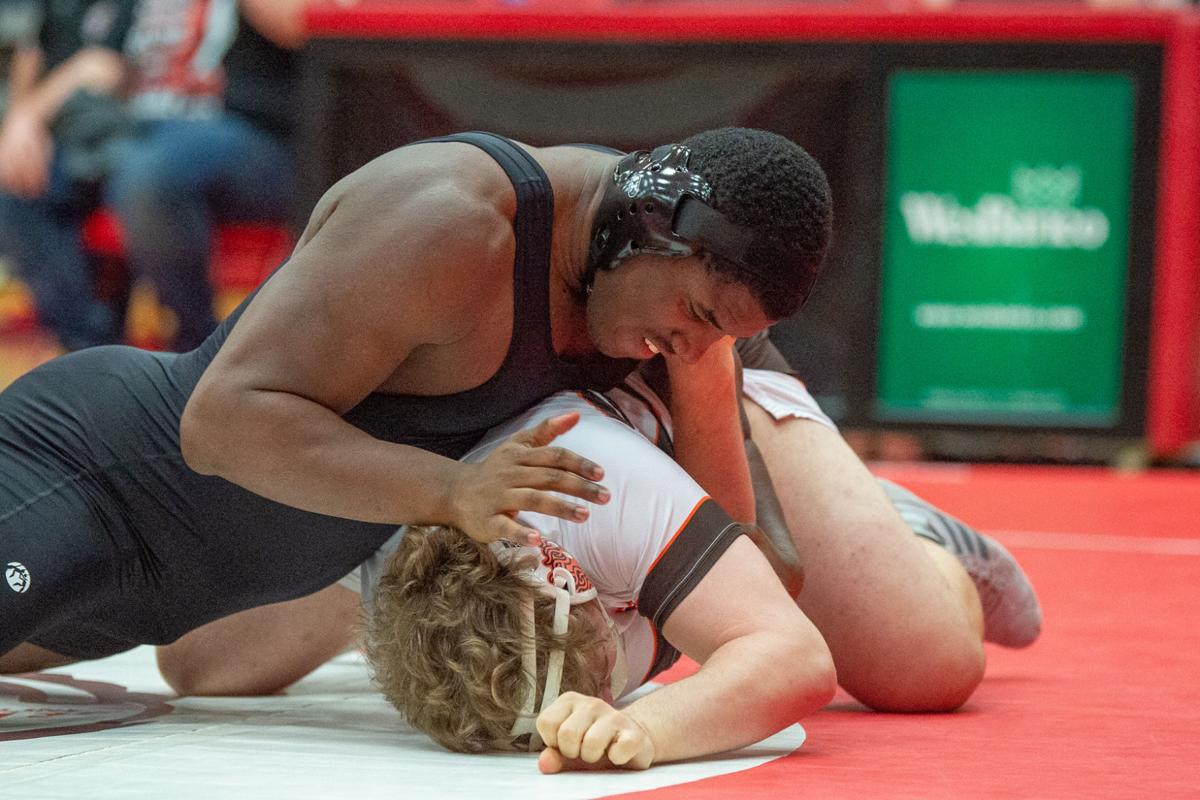 Jeffersonville’s Matthew Munoz looks to the clock in the 285-pound championship match of the Jeffersonville Regional on Saturday.

JEFFERSONVILLE — Six Clark County wrestlers were crowned champions Saturday in the Jeffersonville Regional, and a total of 15 are headed to the Evansville Reitz Semistate.

The host Red Devils went 4-for-4 in the finals, taking runner-up by one point over third-place Tell City, as Cody Matherly (195 pounds), Ethan Rogers (220) and Matt Munoz (285) won regional titles in the final three matches of the afternoon at Johnson Arena.

Columbus East won the team title, its fourth regional in a row, with 165 points. Jeff was second with 115, one ahead of the Marksmen.

Jeffersonville’s first champ was senior Adonis Boyd, who was also celebrating his 18th birthday. Boyd finished off Madison’s Jacob McRoberts by technical fall, 22-7, in the 126-pound final and teammates serenaded him with a “Happy Birthday” rendition.

“It feels great. At first, I thought it would make me a little nervous and feel like I had to show out on my 18th birthday. And to get the tech fall and have everyone sing, ‘Happy birthday,’ that was even better,” Boyd said.

Boyd was one of seven Red Devils to qualify for the Reitz Semistate.

“In the last 20 years, this might be the second-most regional champs we’ve had,” Jeffersonville coach Danny Struck said. “Sending seven to semistate’s a good day.”

Fifth-place Charlestown will send five — the most for the program since 2009 — to the Ford Center. New Washington’s Jason Profitt and Austin Taylor are also moving on, as is Providence senior Chase Aldridge, who won the title at 132.

The Pirates finished a 1/2-point behind Madison with 83.5. Colin Knox dominated the 120-pound weight class en route to the title, while Deke Brown and Manuel Ordorica took runner-up honors. Ben Phillips (152) and Lucas Gagnon (220) were third.

Knox was as dominant as any champion Saturday, winning his first match by pin, tech fall in the semifinals and another pin in the finals.

“I was really focused today,” said Knox, a junior with a 35-1 record. “I really wanted to have a good stand-up, I focused on my shots. I was prepared and worked hard over the summer. It went really well for me. My strategy is offense from every position. If you win 100 percent of the match, there’s no way you can lose. That’s my mentality.”

Aldridge took his first regional crown and has his sights on qualifying for the IHSAA State Finals. Aldridge won a 2-1 decision against Eastern’s Mason Martin in the final. The two have gone head-to-head a number of times. As a result, each wrestler had answers for every move.

“It’s like a football game, you play the same team over and over again, you know what they’re doing,” said Aldridge, who also played football for the Pioneers. “I got a good switch on him and rode him out the next round-and-a-half or so. Hopefully I get a good draw at semistate. I’m just trying to get to State, one match at at time. [It’s my] last shot at the Bank [i.e. Bankers Life Fieldhouse] for sure.”

“They wrestle similar styles and go upper-body. We had a few opportunities, we just missed one. It was a good match. Cody’s a tough kid, fun to watch,” Charlestown coach Adam Doherty said.

Matherly, a regional champ at 182 last year, cruised into the finals and hopes to learn from the tightly-contested dual when he prepares to compete at semistate.

“I always tend to do better when I have competition throughout the entire day. With both of my previous matches, first-round pins, I wasn’t in my rhythm as much. I’m going to tell myself I need to warm up better before my matches,” Matherly said. “If I get my opportunity like I did last year, I will make it to state this year. No ifs, ands, or doubts about it.”

Rogers took a similar path, winning by fall and then major decision before getting a tough test in the finals. He held on for a 9-8 triumph over East’s Shawn Tyler.

Junior heavyweight Matt Munoz had a strong tournament, winning a 5-1 decision in the finals against East’s Ashton Hartwell.

“He probably got seven takedowns today. He looks good,” Struck said of Munoz.

The Jeff coach was pleased with his team’s performance overall, particularly that of his three first-time semistate qualifiers.

Junior Robert Cline was pinned in the semifinals, but bounced back to get a pin in the third-place match, improving to 29-18 this season.

Like Cline, Devin McDaniel earned a semistate berth against a wrestler he had been able to beat in past matches. McDaniel pinned Scottsburg’s Jayden Criswell (36-3) before facing Knox in the 120-pound semifinals. McDaniel pinned Tell City’s Kelby Glenn for third place.

Gagnon also took third place with a pin of Madison’s Tucker Adams in 1:30.

Meanwhile, Profitt took third at 138 while Taylor finished fourth at 160.